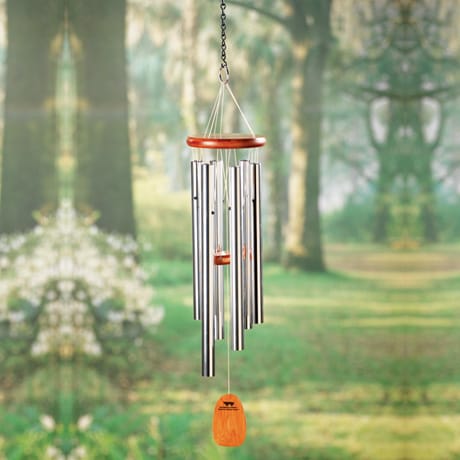 $49.95
Share Me:
add to wish list
Overview
Made by hand, tuned to the notes of the world's most popular song. Handcrafted, hand-tuned. Aluminum and laminated Ashwood. Six silver anodized aluminum tubes. Ashwood has a rich cherry finish. Plays the inspiring tones heard in the opening measures of "Amazing Grace." Wood paddle (wind catcher) is engraved with the notes: C, F, A, G, F, A. Hangs 25". Ready to hang indoors or out. A perfect gift. May be personalized with engraving (VD0522E). From Woodstock Chimes, makers of the world's favorite wind chimes. America's spiritual anthem and the most popular song on earth, "Amazing Grace" was written in the 1700s by John Newton, a former slave-ship captain who experienced a religious conversion after a terrifying storm at sea. Newton was ordained a minister in 1764 and took over a small parish in Buckinghamshire, England. He wrote the words to "Amazing Grace" in 1772, but the song didn't become popular until much later. In 1835, Newton's words were paired with a melody called "New Britain," which was based on an older melody called "Harmony Grove." In 1922, the Original Sacred Harp Choir made the first recording of "Amazing Grace" (still called "New Britain"). The recording is in the Library of Congress. It's one of more than 3,000 recordings of "Amazing Grace" in the Library's collection. According to the Guinness Book of World Records, that's the largest compilation of recordings of a single work in the world. In addition to the slow and stately version most of us know, "Amazing Grace" has been arranged for all kinds of genres: gospel, country, folk, funk, punk, rock, R&B, jazz, even heavy metal. It's believed that "Amazing Grace" is performed as often as 10 million times every year. Personalized wind chime sold separately (VD0522E).