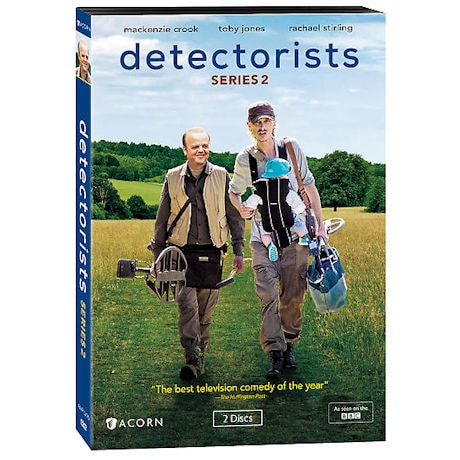 $39.99 $29.99
4 Reviews Write a Review
Item #: XA1082
The quirky members of the Danebury Metal Detectors Club return for more bickering and treasure-hunting. Andy (Mackenzie Crook, Pirates of the Caribbean, Game of Thrones) is still unemployed and Lance (Toby Jones, The Hunger Games, Captain America) is still unlucky in love. This BAFTA-winning Britcom is "one of the loveliest, most inventive things on TV" (Daily Mail). 7 episodes, 2 END_OF_DOCUMENT_TOKEN_TO_BE_REPLACED
Add to Wish List

The quirky members of the Danebury Metal Detectors Club return for more bickering and treasure-hunting. Andy (Mackenzie Crook, Pirates of the Caribbean, Game of Thrones) is still unemployed and Lance (Toby Jones, The Hunger Games, Captain America) is still unlucky in love. This BAFTA-winning Britcom is "one of the loveliest, most inventive things on TV" (Daily Mail). 7 episodes, 2 DVDs, SDH.

Episode 1
Andy's been thinking about internet dating. Not for him, but for his friend Lance who's still not over the departure of his ex-wife. A mysterious stranger arrives to tempt the Danebury Metal Detecting Club in more ways than one.

Episode 2
A slightly jealous Andy spies on Sophie as she helps Peter with his research and on Lance as he secretly meets Internet date Kate though Lance and Andy unite to warn rival detectorists Simon and Garfunkel against joining the search for the plane wreckage. Becky meanwhile, bored with her job, considers voluntary work abroad and the mayor asks Terry to help him find his lost ceremonial chain.

Episode 4
Russell and Hugh lean on the mayor to let them dig in his field but Terry discovers that Peter's grandfather did not die in a plane crash though Peter seems vague about it and instead asks Sophie to tour the country with him in a camper van. Annoyed to see that an amateur detectorist in Warwickshire unearthed a valuable cache of coins Andy is further perturbed when his interview for the job in Africa does not seem to go well. Lance meanwhile is also upset when Kate finds his attempts to connect with her overpowering.

Episode 5
Andy passes his interview but keeps the fact a secret from Becky, which so annoys her she considers leaving him, whilst Lance is worried that his overly effusive actions have lost Kate forever. The pair discover that Peter is an impostor whose real interest is in unearthing a cache of gold coins in collusion with Simon and Garfunkel and without a license to do so. A nocturnal stake-out results in Simon and Garfunkel being arrested though Peter escapes.

Episode 6
Peter is arrested following the news that he has a life-time ban on metal detecting for disturbing war graves in Germany. The group hosts a rally for other local enthusiasts with Kate turning up to reconcile with her father and Andy getting unexpectedly wise advice from his mother-in-law regarding his and Becky's future. And Lance makes a very valuable find.

Christmas Special
Andy takes a break from voluntary work overseas to witness Lance's latest, possibly valuable, find - which attracts local media attention. Lance takes his car to a garage run by the daughter of a late detectorist and gets a magnificent offer from a local museum. Russell believes this will bring on the Curse of Gold, meaning that Lance will never find anything of worth again so Andy takes him on their last search together to disprove this.