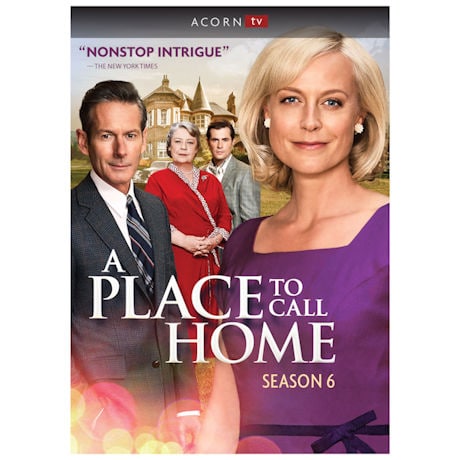 $59.99
Share Me:
add to wish list
Overview
In the final season of this "instantly irresistible saga" (The Wall Street Journal), nurse Sarah Nordmann (Marta Dusseldorp, Jack Irish, Janet King) and the wealthy Bligh clan return for more romance, intrigue, and family drama in this satisfying send-off to the beloved Australian series. "A cross between Dynasty and Downton Abbey with a twist of Mad Men" — Parade. 10 episodes, 8 hrs, 3 DVDs.
Episodes
Episode 1: For Better or Worse
Upon returning from Israel, Sarah and George host a family gathering to announce a surprise, but an unexpected reunion causes tension. In Hawaii, Anna hides a secret.

Episode 2: Salt of the Earth
Sarah and Harry help Roy deal with a devasting loss, and Carolyn accepts James's job offer. Anna decides to accompany Olivia and Matthew back to Australia.

Episode 3: Darkness and Light
Henry recovers from his car accident as Inverness prepares for a funeral. Matthew, Olivia, and Anna get a shock when they arrive at Douglas's house.

Episode 4: Against the Tide
As Carolyn reconnects with her old flame, Matthew tries to convince Olivia to stay with him. Jack suspects local troublemaker Stan O'Rourke was behind Henry's accident.

Episode 5: Look Not in My Eyes
Matthew and Olivia learn the identity of Georgie's birth mother, while Anna stands proudly as an unwed mother-to-be. Henry's friend interviews for the surgeon position.

Episode 6: Staring Down the Barrel
As Henry suffers a breakdown, Jack worries about being forced out of the hospital by the board. Stan exhibits strange behavior but refuses to be examined.

Episode 7: New Adventures
George tries to comfort Sarah through her crisis, but she pushes him away. Jack brings Dr. Burton a proposition, and Doris distances herself from the Blighs.

Episode 8: Autumn Affairs
Anna sticks to her principles by not hiding her pregnancy from the film producers. As the women's clinic transforms into Jack's community clinic, Carolyn heads to Sydney.

Episode 9: Life Longs for Itself
Four months later, Carolyn and Jack are separated, and one of Anna's novels is now a radio serial. As Anna plots to reunite her parents, Olivia begins a new romance.

Episode 10: Reaching Home
As the Blighs celebrate Christmas and Hanukkah, Jack slips further into depression, until a conversation with Frank inspires him to make a courageous decision.