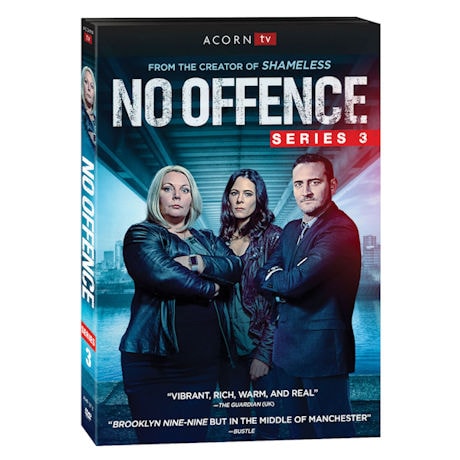 $49.99 $39.99
Share Me:
add to wish list
Overview
Creator Paul Abbott (Shameless) delivers a police procedural with a difference. Set in a crumbling cop shop on the wrong side of Manchester, the darkly comic series follows a group of tough but bighearted officers, led by the highly capable DI Vivienne Deering (Joanna Scanlan). Series 3 finds Deering and her team providing security at a contentious election debate, but tragedy strikes when a gunman attempts to assassinate one of the candidates. 6 episodes, 4 ½ hrs, 2 DVDs, SDH. Mature audiences.
Episodes
Episode 1: Assassination Attempt
A mayoral debate goes tragically awry when a deadly shooter enters the building. Viv and the team must race to catch the killer and try to understand what motivates his attempted assassination of an underdog mayoral candidate.

Episode 2: Botulin Burgers
Beckett's next target is Manchester's children. Deering and the team must track down a poisoned batch of halal meat Beckett has unleashed on the city before it's too late. While on the hunt, Dinah discovers an undercover cop's explosive secret.

Episode 3: Death in a Cemetery
It's Election Day, and the team is on high alert. When a man is found dead, it seems Beckett's reign of terror is escalating. The team are right on Beckett's tail, however, as a meeting between him and his getaway driver promises to be the key to his capture.

Episode 4: In His Head
Deering and the team have 48 hours to get Dennis to betray his best friend and turn police informant. Dennis won't budge, but when Viv tunnels down to his deepest insecurities, she unleashes more than she could have bargained for.

Episode 5: Loyalty
Deering and the team have a new boss, DCI Taylor, who is implementing a new hard-line agenda. While avoiding Taylor's interference, the team focus on trying to engineer a face-to-face meeting with Beckett. But will it end in more tragedy?

Episode 6: Payback
Deering and the team have only one option left to them. They put a spectacular plan in motion to get justice once and for all. But the team's ingenious strategy is threatened when one of their own is kidnapped.

"Hilarious and fabulous" — The Guardian (UK)