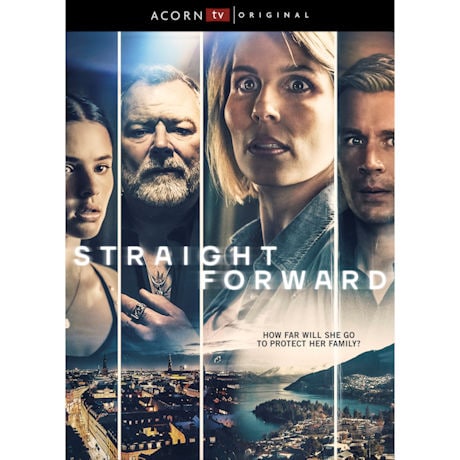 $49.99
Share Me:
add to wish list
Overview
When her father is murdered in cold blood, Danish con-woman Sylvia Petersen (Cecilie Stenspil, The Protectors) has her life turned upside down. Reeling from his death, she plots revenge on crime kingpin Ravn (Mark Mitchinson, Dear Murderer, Rake). A master of disguise and deception, Sylvia attempts to leave her criminal past behind her by moving to a small New Zealand town to start a new life. With stunning scenery and high-stakes action, this gritty international thriller offers an adrenaline-filled ride across the globe. 8 episodes, 6 hrs, 2 DVDs, SDH.


Episodes
Episode 1: Revenge
Danish con-woman Sylvia Petersen secretly works with her father, Des, in his stolen-goods operation, but her world is turned upside down when he is murdered in cold blood. Believing crime kingpin Ravn ordered the hit, Sylvia decides to take revenge on him.

Episode 2: Not Far Enough
Sylvia arrives in New Zealand and secures an apartment above a café in exchange for working at the bar, while her mother, Lisbeth, and daughter, Ida, retreat to a safe house in Denmark. After being put on mandatory leave, Detective Qvist embarks on his own inquiry.

Episode 3: Kidnapped
Ravn captures Ida and issues Sylvia an ultimatum: come back within 24 hours, or Ida will be killed. In New Zealand, Sylvia races against the clock to organize an exchange of incriminating files against Ravn to save her daughter, while at the same time convincing Ravn and Qvist that she's still in Denmark.

Episode 4: Fly in the Ointment
Safe but worried about her father, Gillard, Ida tries to contact him, despite Lisbeth's warnings that he may have sold them out to Ravn. While Ida prepares to leave Denmark, Sylvia gets closer to Adam.

Episode 5: Charity Begins at Home
With no other leads on Sylvia's whereabouts, Ravn reaches out to Qvist with evidence of her multiple identities. Sylvia and Ida help Adam organize a fundraiser, while New Zealand detectives pressure Gillard for information under the threat of deportation.

Episode 6: Closing In
After nearly being caught by Ravn's associate Karmen, Sylvia and Ida make plans to escape, but Sylvia is reluctant to get Adam involved. Despite the risk, Lisbeth refuses to leave Denmark until Des is laid to rest.

Episode 7: Till Death Do Us Part
Sylvia escapes her ordeal with Karmen, but she is severely wounded and must trust Adam to rescue Ida. Lisbeth intends to flee to France following Des's funeral, but an altercation with Ravn's men spells disaster for Sylvia's team.

Episode 8: The Last Con
After receiving a tipoff that Ravn is coming for her, Sylvia is forced to make a deal with Qvist to catch Ravn in the act. Their dangerous plan becomes even more complicated when Lisbeth arrives in New Zealand.