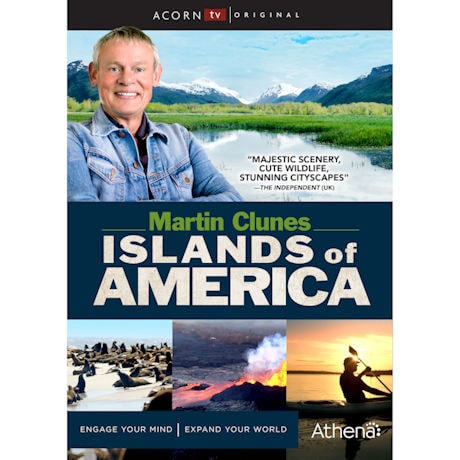 $34.99
Share Me:
add to wish list
Overview
Martin Clunes embarks on an epic journey around the coast of America, exploring the incredible variety of islands all along it's shores. From Hawaii's islands of fire to the playgrounds of presidents off the New England coast, this unique tour presents breathtaking encounters with nature—and with the colorful people who embrace life at America's edge. 4 episodes, 4 hrs, 1 DVD.
Episodes
Episode 1: Hawaii and Alaska (48 min)
Martin begins his journey in Hawaii, the only US state made up entirely of islands. After leaving tourist-filled Oahu, he explores the active volcanoes of the Big Island, the largest island in all US territory, and the ancient traditions of Molokai Island. Next, Martin heads 2,500 miles north to Kodiak Island in Alaska, where there is one bear per square mile.

Episode 2: Washington State, California, and Louisiana (49 min.)
In Washington State, Martin celebrates the Fourth of July on the San Juan Islands, then journeys down the California coast to the isolated Channel Islands, home to one of the world's largest colonies of seals and sea lions, as well as an endangered population of foxes. In Louisiana, he samples hot sauce at the Tabasco® plant on Avery Island and explores hurricane-ravaged Delacroix Island.

Episode 3: Puerto Rico, Georgia, North Carolina, and Virginia (49 min.)
Martin enjoys salsa dancing lessons and rum tasting in Puerto Rico before heading to the Sea Islands off the coast of Georgia, where the inhabitants attempt to preserve the traditional practices of African slaves. On the Outer Banks of North Carolina, Martin learns about the mysterious lost colony of Roanoke, before traveling to Chincoteague, Virginia, to watch the world-famous wild pony swim.

Episode 4: New York, Massachusetts, and Maine (49 min.)
In New York, Martin faces his fear of heights at the top of the Empire State Building in Manhattan, learns about immigration on Ellis Island, and enjoys Coney Island's amusement park. Heading to Massachusetts, he stops in Martha's Vineyard, where the movie Jaws was filmed, before seeing real great white sharks off the coast of Cape Cod. Then he ends his journey on Maine's most remote islands.