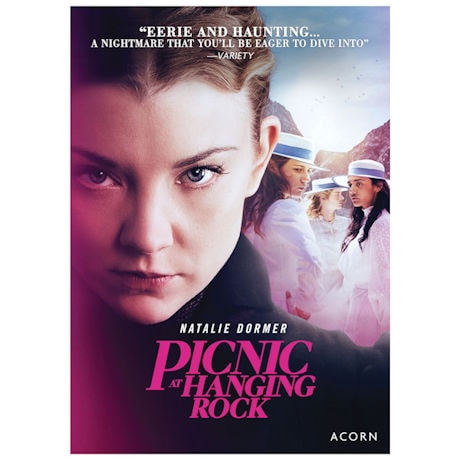 $39.99
Share Me:
add to wish list
Overview
Natalie Dormer (Game of Thrones) leads a dazzling ensemble cast in this adaptation of the acclaimed Australian novel. On Valentine's Day, 1900, three schoolgirls and their governess vanish under mysterious circumstances while on an outing. The subsequent investigation exposes long-held secrets, as the students, families and staff of the school reckon with growing paranoia—and the possibility that some answers are beyond our grasp. 6 episodes, 5 hrs, 2 DVDs or Blu-ray discs, SDH. Mature audiences.


Episodes
EPISODE 1:
Mysterious widow Hester Appleyard arrives in Australia and starts a school for young ladies. But six years later, something unthinkable happens to three of her students.

EPISODE 2:
Three pupils and a governess have disappeared. As locals search for the missing, an aristocratic Englishman—the last to see the girls—makes a shocking discovery.

EPISODE 3:
The Rothschild heiress has been found but remembers nothing. As rumors spread, the sergeant begins investigating the college, intensifying Hester's paranoia.

EPISODE 4:
Hester struggles to contain mounting hysteria, and a mysterious visitor summons memories of her dark past. Meanwhile, orphan girl Sara seeks escape from the college.

EPISODE 6:
Believing her vengeful husband is behind the disappearances, Hester prepares to flee. The truth of her haunted past and the secret lives of the missing girls are exposed.

Crew Interviews:
The director, writer, producer designer, and other crew members talk about the inspiration for the series, shooting at Hanging Rock, and more. (24 min).