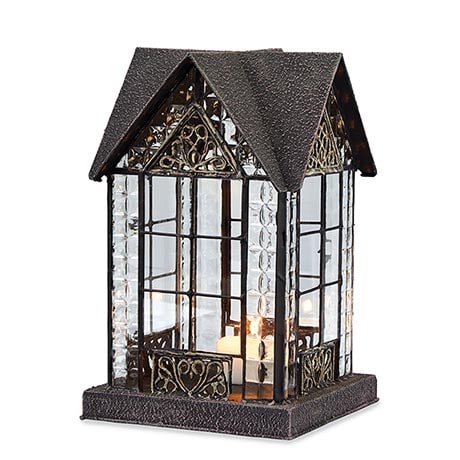 $29.95
Buy 3 or more for $26.65 each
Share Me:
add to wish list
Overview
Inspired by historic English architecture, this charming lantern illuminates any spot in your home with sparkling charm. Devonshire, or more properly, Devon, is a county in the south of England, reaching from the Bristol Channel in the north to the English Channel. Devon's area is 2,590 square miles, and its population is about 1.1 million. Devon's biggest cities are Exeter, Torquay and Plymouth. Devonshire's historical origins reach back to classical antiquity although human remains from 30-40,000 years ago were found in Kent's Tavern in Torquay. Ever since then, humans have lived in Devonshire. From prehistoric hunter-gatherers, to Celts, through the Roman occupation in the early part of the first millennia, Saxons, Normans and the odd invasion by Danish Vikings. Today, Devon's two separate coastlines are dotted with lofty cliffs and sandy beaches. Tourists flock to this area for its mild climate and easy access to the water. Features beveled glass panes set in metal frames. Use indoors or outdoors; alone or in a grouping. Use tea light candles only. We recommend battery operated tea lights. 6" square, 9 1/8" high.