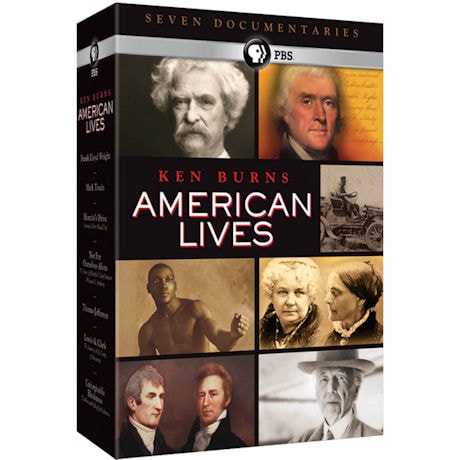 No Reviews Write the First Review
Item #: WB6432
Ken Burns American Lives Collection is a compilation of seven outstanding biographies and stories of some of America's most celebrated pioneers and historical events. Programming in this series began with Thomas Jefferson in 1997 and concludes with Unforgivable Blackness: The Rise and Fall of Jack Johnson in 2005. The 7-disc Gift Set collection includes…: Thomas Jefferson - Returning from France, END_OF_DOCUMENT_TOKEN_TO_BE_REPLACED
Add to Wish List

Ken Burns American Lives Collection is a compilation of seven outstanding biographies and stories of some of America's most celebrated pioneers and historical events. Programming in this series began with Thomas Jefferson in 1997 and concludes with Unforgivable Blackness: The Rise and Fall of Jack Johnson in 2005. The 7-disc Gift Set collection includes…:

Thomas Jefferson - Returning from France, Jefferson strives to preserve the fragile new U.S. government and helps create the first political party, in bitter struggles with the Federalists. He becomes vice president in 1797, and the third U.S. president in 1801. His Louisiana Purchase doubles the nation's size, but he faces controversy and scandal, finally retiring to his beloved Monticello in 1809. His last years are spent founding the University of Virginia.

Lewis & Clark - The most notable expedition in U.S. history was led by Meriwether Lewis and William Clark, with soldiers, an African-American slave, a female guide, and Canadian boatmen. Ken Burns' Lewis & Clark re-creates the 1803 journey to locate the Northwest Passage. The explorers found a varied landscape and a dizzying diversity of Indian peoples.

Frank Lloyd Wright - Wright and Olgivanna began the Taliesin Fellowship, taking on apprentices. Fallingwater brought him new acclaim for its modern principles and materials integrated with the landscape. Usonian houses were high-quality, affordable housing for mass production. In 1937, the Fellowship began annual pilgrimage to Arizaona's Taliesin West. His provocative postwar gas stations, synagogues, and a spiral-ramped Guggenheim Museum, closed out his career.

Not for Ourselves Alone: The Story of Elizabeth Cady Stanton & Susan B. Anthony - Two women, one allegiance. Together Elizabeth Cady Stanton and Susan B. Anthony fought for women everywhere, and their strong willpower and sheer determination still ripple through contemporary society. Ken Burns's Emmy® Award-winning documentary recounts the trials, tribulations, and triumphs of two pioneers striving to give birth to the women's movement. Not until after their deaths was their shared vision of women's suffrage realized.

Mark Twain - Considered the funniest man of his time, Mark Twain was a critic of human nature who used his humor to attack hypocrisy, greed, and racism. As America's best-loved author, he created some of its most memorable characters and quoted sayings. Director Ken Burns digs beneath the legend to discover the true Twain and reveals his extraordinary life, filled with adventure and literary pursuit, incredible success and defeat, comedy, and tragedy.

Horatio's Drive: America's First Road Trip - Get set for an adventure that marked a new era in America! Film-maker Ken Burns presents the hilarious 1903 saga of the first transcontinental automobile trip. On a visionary whim and a $50 bet, Dr. Horatio Nelson Jackson became the first person to drive an automobile across the continent. His arrival in New York City, after every imaginable breakdown and delay, proved that the ""horseless carriage"" really did have a future.

Unforgivable Blackness: The Rise and Fall of Jack Johnson - In this Emmy® Award-winning documentary by Ken Burns, follow Jack Johnson's journey from his beginnings as the son of former slaves, to his entry into the brutal world of professional boxing, where he was able to battle his way up through the ranks and become the first African-American Heavyweight Champion of the World. The biography of Jack Johnson is accompanied by more than fifty photographs and draws from a wealth of new material.