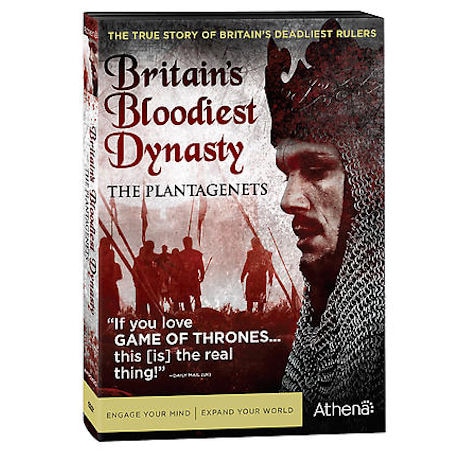 $39.99 $29.99
Share Me:
add to wish list
Overview
A control-freak king, betrayed by his own family after an archbishop's murder. A friendship that collapses into civil war. A revenge-obsessed ruler, and the rise of a vicious despot. Compared to the real-life Plantagenets, the dynasty that dragged Britain out of the Dark Ages into the modern world, Game of Thrones looks almost tame. Presented by acclaimed historian Dan Jones, based on his best-selling book The Plantagenets, this roaring British docudrama is "a solid slab of history ... tasty and nutritious at the same time" (Guardian, UK). Jones calls it "big, bloody and thrilling." 4 episodes, 3 1/4 hrs, 2 DVDs, SDH, viewer's guide. From Athena.


Episodes
Disc 1
Episode 1: Betrayal
Warrior, empire-builder, and founder of the dynasty, Henry II transforms England from a war zone into a superpower. But murder and betrayal by his own family puts in jeopardy everything he has achieved. When the friend he made head of the church also begins to challenge his actions, the king's uncontrollable temper risks disaster for the whole realm.

Episode 2: Hatred
To Henry III, Simon de Montfort once seemed to be the savior of his kingdom, but enmity between the two men now spirals the country towards civil war. Key to this contest are the barons, who wish to exact from Henry new rules for his kingdom that are even more restrictive than the Magna Carta, which they had forced his father to sign.

Disc 2
Episode 3: Revenge
Edward II's shortsighted obsessions lead to a life filled will political violence, bloodlust, and revenge--and, according to legend, to an infamously horrific death. At first his queen, Isabella of France, is a loyal young wife. What turns her into the "she-wolf" that history branded her, ready to take up arms against the king?

Episode 4: Tyranny
The story of the Plantagenets reaches its catastrophic climax under the most vicious of them all, the boy-king Richard II. A hero after he crushes the Peasants' Revolt, the 14-year-old ruler launches a reign of terror that threatens to bring down the whole dynasty. For Richard, the greatest danger comes in the form of his cousin and childhood playmate, Henry Bolingbroke.
Details
Packaging: Boxed set
Run Time: 188 minutes
Format: Widescreen
Number of discs: 2
Language: English
Subtitles: No
Color or B&W: Color
CC: No
SDH: Yes
Region Code: 1
Aspect Ratio: 16:9
Rating: NR. Contains graphic violence, nudity, and sexual situations.
Trailer Press
"If you love Game of Thrones...this [is] the real thing!"--Daily Mail (UK)

"Good old-fashioned storytelling"--The Sunday Times (UK)
Awards
Historian and journalist Dan Jones studied under David Starkey at Cambridge and has written several bestselling histories about the English medieval period, including The Plantagenets and The War of the Roses.