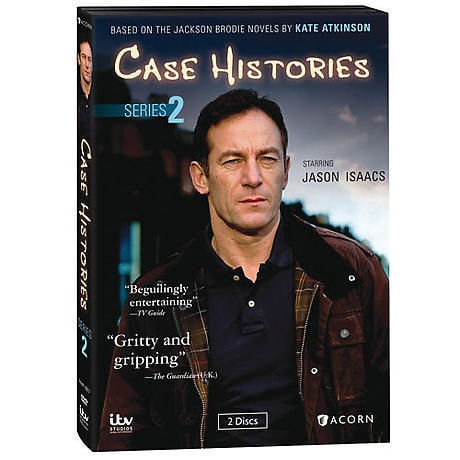 Overview
A tough guy with a soft heart, Jackson Brodie (Jason Isaacs, Harry Potter, The Patriot) is a former Edinburgh cop trying to make a living as a private detective. He has a hard time collecting his debts and paying his bills, but no shortage of clients, since he can't overlook a wrong or say no to a person in need. Based on the novels by Kate Atkinson, seen on Masterpiece Mystery!, this engaging series also stars Amanda Abbington (Agatha Christie's Poirot) and Zawe Ashton (Fresh Meat). 3 episodes, 4 1/2 hrs, 2 DVDs, SDH. Mature audiences.
Episodes
Disc 1
Episode 1: Started Early, Took My Dog
Brodie agrees to help an Australian woman who was given up for adoption find her real parents back in Edinburgh. His investigation leads him to a 35-year-old secret that has darkened the lives of everyone involved in it. Brodie must decide if this is a time to let the law take its course or do what he thinks is best for a child.

Episode 2: Nobody's Darling
A young woman hires Brodie to see if her fiance is cheating on her--and during his inquiries he is also hired by the man's ex-mother-in-law, who suspects the fiance of murdering her daughter. As a straightforward investigation turns into a cold case, matters get more complicated on the domestic front when Brodie's daughter, Marlee, moves in with him.

Disc 2
Episode 3: Jackson and the Women
Brodie takes on two new cases. In one, a teenage boy asks him to discover what really happened to his mother, who was murdered on Christmas Eve when he was three, and in the other, a family hires him to locate their missing 19-year-old daughter. What he discovers in both is painful for all concerned but at least provides two young people with a chance of moving forward.
Details
Packaging: Boxed set
Run Time: 273 minutes, plus bonus programming
Format: Widescreen
Number of Discs: 2
Language: English
Subtitles: No
Color or B&W: Color
CC: No
SDH: Yes
Region Code: 1
Aspect Ratio: 16:9
Rating: NR. Contains nudity, violence, and coarse language.
Press
"Gritty and gripping"-- Daily Mail (UK)