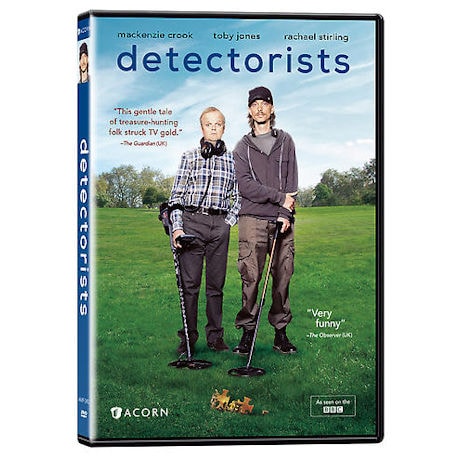 $39.99 $29.99
5 Reviews Write a Review
Item #: XA1072
Members of the Danebury Metal Detectors Club, bickering friends Andy and Lance spend their days searching the Essex countryside, dreaming of finding a fortune. Is each new beep a treasure or just another tin can? The top-rated comedy on Britain's BBC4, this gentle series stars Mackenzie Crook (Pirates of the Caribbean, Game of Thrones) and Toby Jones (The Hunger Games, END_OF_DOCUMENT_TOKEN_TO_BE_REPLACED
Add to Wish List

Episode 1
Metal detectorists Andy and Lance's search for a priceless Saxon hoard buried in the English countryside takes them down a bizarre, but promising, path. Tension builds between Andy and Becky as she questions the amount of time he's investing in his quest.

Episode 2
When the Antiquisearchers, a pair of rival detectorists, appear on farmer Bishop's property, Andy and Lance must find a way to shut them out. Sophie does some digging at the university library and emerges with a controversial theory about the hoard's whereabouts.

Episode 3
With the Antiquisearchers hot on Andy and Lance's trail, the duo turn to ex-cop Terry for backup, with disastrous results. Similarly catastrophic is their open-mic performance at the White Horse pub.

Episode 4
With the Danebury Metal Detecting Club in need of a new president, Andy steps up to the challenge. But his blossoming relationship with Sophie rubs both Lance and Becky the wrong way and turns a routine trivia night toxic.

Episode 5
Andy and Lance's spirits are at an all-time low when they're betrayed by Sophie. To make matters worse, Becky and Andy's relationship is quickly deteriorating. Will Andy be able to repair all the damage he's done?

Episode 6
Many pressing questions confront the Danebury detectorists: Will farmer Bishop be charged with murder? Will Lance stand up to his scheming ex-wife? And will Andy sacrifice the thing he loves most to keep Becky?

"One of the loveliest, most inventive things on TV all year"--The Daily Mail (UK)