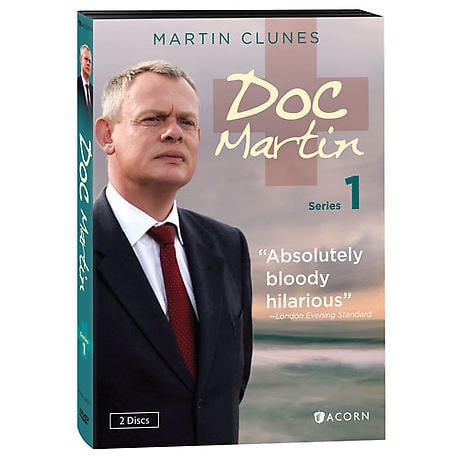 $29.99 $19.99
Share Me:
add to wish list
Overview
Meet Martin Ellingham (Martin Clunes, Men Behaving Badly), an eminent physician with a nasty disposition. Forced to give up his career as a London surgeon after developing a blood phobia, he takes a job as GP in the sleepy Cornish village of Portwenn. His irascible manner and permanent scowl soon have the town in an uproar. He insults each patient he sees and offends nearly everyone else. The only person who's glad to see him is his Aunt Joan. Quirky characters, comic situations, and impossibly picturesque scenery have made Doc Martin a smash hit on both sides of the Atlantic. Clunes is brilliant as the arrogant physician with a head full of knowledge and no people skills. Will he throw in the towel or succumb to the charms of village life, including those of lovely schoolteacher Louisa Glasson (Caroline Catz, Murder in Suburbia)? Best TV Comedy Drama—British Comedy Awards. 6 episodes, approx 280 min. on 2 DVDs. Limit 5 per customer.
Episodes
Disc 1
Episode 1: Going Bodmin
Doc Martin makes a bad impression on one Portwenn resident even before he's officially hired. Things go downhill from there after he casts a pall over a local festival and gets punched in the nose.

Episode 2: Gentlemen Prefer
Martin fires his receptionist and informs the locals that they can no longer use his waiting room as a social center. In return, the villagers shun him, the cafe won't serve him, and patients cancel their appointments.

Episode 3: Sh*t Happens
A stomach bug sweeps through Portwenn. Martin creates mass panic by declaring it's the swimming pool, and then infuriates the locals by blaming the village water supply. Meanwhile, plumber Bert Large is making a mint off his new business: bottled water.

Disc 2
Episode 4: The Portwenn Effect
The annual Portwenn Players Dance is a highlight of the village's social calendar. Louisa invites Martin, but the doctor turns her down. Martin also pays a visit to a park ranger who believes he lives with a six-foot squirrel.

Episode 5: Of All the Harbours in All the Towns
Aunt Joan's old flame arrives in Portwenn and rekindles their romance. Confidentiality prevents Martin from telling Joan about the man's health problem. And the doc has love problems of his own: a local teenager has a crush on him.


RELATED ITEMS TO ABOVE PRODUCT