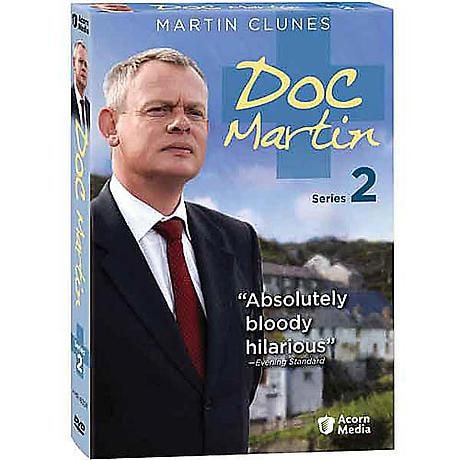 $49.99 $34.99
5 Reviews Write a Review
Item #: XA1122
As a successful London surgeon, Martin Ellingham (Martin Clunes, Men Behaving Badly) didn't need a bedside manner. His patients were unconscious, so he could be as rude and arrogant as he pleased. All that changes when he develops a crippling fear of blood and is forced to switch careers. Now a GP in a sleepy, picturesque Cornish fishing village, Doc END_OF_DOCUMENT_TOKEN_TO_BE_REPLACED
Add to Wish List

As a successful London surgeon, Martin Ellingham (Martin Clunes, Men Behaving Badly) didn't need a bedside manner. His patients were unconscious, so he could be as rude and arrogant as he pleased. All that changes when he develops a crippling fear of blood and is forced to switch careers. Now a GP in a sleepy, picturesque Cornish fishing village, Doc Martin offends everyone in town, including the one person he wants to impress, beautiful teacher Louisa Glasson (Caroline Catz, Murder in Suburbia). Getting her attention proves even more difficult when Louisa's old flame returns to the village and becomes his new rival. Martin Clunes shines in this award-winning comic drama set amid eccentric townsfolk and spectacular scenery. As the doctor says, "It's good to be loathsome." 9 episodes, approx. 464 min. on 3 DVDs.

Disc 1
Episode 1: Old Dogs
Martin has a new receptionist and a new problem: Louisa's former love, the suave Danny Steel, has come home to Portwenn. Meanwhile, Martin detects signs of dementia in an elderly patient and learns the shocking reason for a fisherman's long history of injuries.

Episode 2: In Loco
An accident in the local fish-and-chips shop and a nasty skin rash at the school make Martin even crankier. Louisa is up for headmistress, and Martin, as an unwilling governor of the school, must decide if she's in or out.

Episode 3: Blood Is Thicker
Martin treats two brothers for salmonella poisoning, likely caused by the putrid contents of their fridge. But there's something else amiss about this family, which has a bizarre passion for taxidermy--and a mother who hasn't been seen in years.

Disc 2
Episode 4: Aromatherapy
A local radio host seems to have a drinking problem but refuses Martin's help. The doctor does have another patient who welcomes his advice: an old man emitting a horrible stench. To add to his frustrations, Martin's romantic triangle becomes even more complicated.

Episode 5: Always on My Mind
When a village woman dies at home, the husband accuses Martin of murder and takes out his anger on Martin's aunt Joan. The doctor also makes inept attempts to rekindle his friendship with Louisa.

Episode 6: The Family Way
Martin's estranged parents come to Cornwall for an icy reunion with their only son. His father sneers at Martin's small-town status and his mother barely speaks. But as the real reason for their visit comes to light, Martin reveals an unseen side.

Disc 3
Episode 7: Out of the Woods
The local constable asks Martin to be best man at his wedding, but the doctor flatly refuses. The stag weekend in the woods ends up going terribly wrong; however, Louisa is relieved by the outcome.

Episode 8: Erotomania
A Salvation Army worker arrives in Portwenn to trace a missing woman, and the constable's checkup has surprising results that could impact his upcoming nuptials. Danny asks Louisa to move in with him, but she feels ambivalent.

Special Episode: On the Edge
Bird-watchers in search of a rare species disturb the peace of Portwenn, which lately doesn't seem so tranquil. Martin may lose his receptionist and is told to brush up on his people skills--or else. And Louisa's father arrives unannounced, accompanied by his bipolar friend.