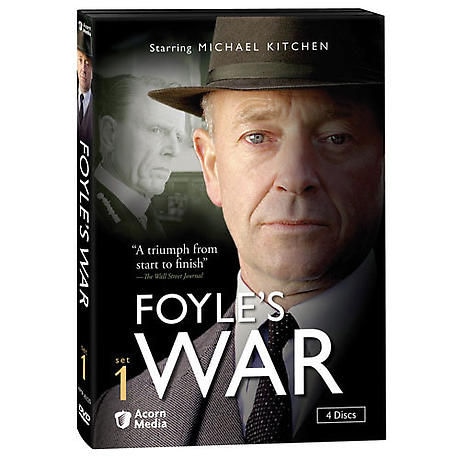 $49.99 $39.99
Buy 2 or More Sets, Save 10%
Share Me:
add to wish list
Overview
While WWII rages across the Channel, police detective Christopher Foyle (Michael Kitchen) reluctantly remains on duty in his quiet English coastal town. The battle comes to Foyle in its own way as he probes war-related cases of murder, espionage, and treason. Mystery blends with history, moral complexity, and period atmosphere in this splendid British series. Includes four complete mysteries. CC, approx. 400 min. on 4 DVDs.
Episodes
Disc 1
The German Woman
When a beautiful Austrian woman is found murdered with a swastika painted on a nearby tree, Foyle realizes the seemingly peaceful Sussex town harbors any number of suspects.

Disc 2
The White Feather
The arrest of a young girl on a sabotage charge brings Foyle into contact with a group of English Nazi sympathizers.

Disc 3
A Lesson in Murder
A conscientious objector dies in police custody, setting in motion a series of suspicious deaths and a complicated puzzle for Foyle.