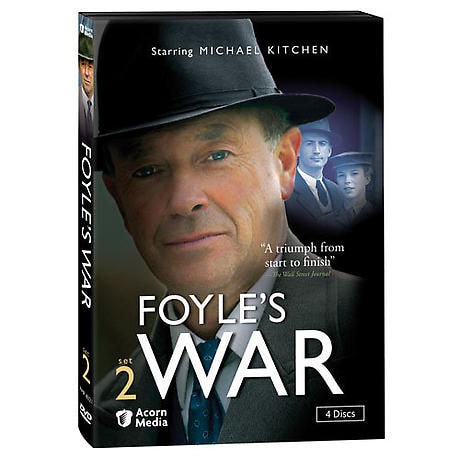 $49.99 $39.99
Buy 2 or More Sets, Save 10%
Share Me:
add to wish list
Overview
While WWII rages across the Channel, police detective Christopher Foyle (Michael Kitchen) reluctantly remains on duty in his quiet English coastal town. The battle comes to Foyle in its own way as he probes war-related cases of murder, espionage, and treason. Mystery blends with history, moral complexity, and period atmosphere in this splendid British series. Includes four complete mysteries. CC, approx. 400 min. on 4 DVDs.
Episodes
Disc 1
Fifty Ships
Foyle's determined investigation of a body on a deserted beach puts at risk the donation of American Aid and the crucial start of the Lend-Lease in the war.

Disc 2
Among the Few
Pilots and their girlfriends live fast and die young in a story of greed and passion where Foyle finds appearances are deceptive.

Disc 3
War Games
Divided loyalties lead to revenge and murder when a businessman puts profits before principles in a secret pact with the Nazis.