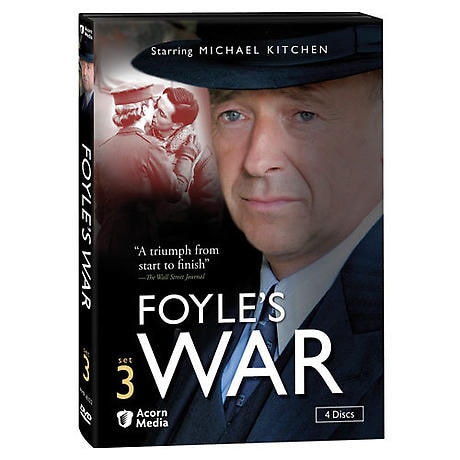 $49.99 $39.99
Buy 2 or More Sets, Save 10%
Share Me:
add to wish list
Overview
While WWII rages across the Channel, police detective Christopher Foyle (Michael Kitchen) reluctantly remains on duty in his quiet English coastal town. The battle comes to Foyle in its own way as he probes war-related cases of murder, espionage, and treason. Mystery blends with history, moral complexity, and period atmosphere in this splendid British series. Includes four complete mysteries. CC, approx. 400 min. on 4 DVDs.
Episodes
Disc 1
The French Drop
Investigating a suspicious death, Foyle gets caught up in the rivalry between the established spy agency MI5 and the newly created SOE (Special Operations Executive).

Disc 2
Enemy Fire
Sabotage, murder, and adultery at a pioneering RAF hospital brings Foyle face to face with the devastating physical and emotional consequences of war.

Disc 3
They Fought in the Fields
A murdered farmer and the crash landing of a German plane present a confusing case, especially as spring is in the air and even Foyle is not immune to a whiff of romance.