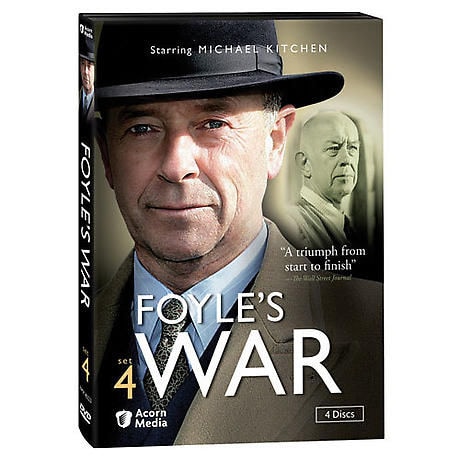 $49.99 $39.99
Buy 2 or More Sets, Save 10%
Share Me:
add to wish list
Overview
While WWII rages across the Channel, police detective Christopher Foyle (Michael Kitchen) reluctantly remains on duty in his quiet English coastal town. The battle comes to Foyle in its own way as he probes war-related cases of murder, espionage, and treason. Mystery blends with history, moral complexity, and period atmosphere in this splendid British series. Includes four complete mysteries. CC, approx. 400 min. on 4 DVDs.
Episodes
Disc 1
Invasion
As the first American GIs arrive to build an airbase near Hastings, the murder of a barmaid further strains already-tense relations between the locals and the Yanks.

Disc 3
Bleak Midwinter
The death of a young munitions worker and the murder of Paul Milner's wife seem linked, and Foyle strives to clear his sergeant from suspicion.

"The best one yet!"--Brattleboro Reformer

"Kitchen is superb as Foyle, if you haven't seen it, then you're missing out on an appealing British mystery."--Daily News of Los Angeles

"A quiet delight. Strangely, it's the series' lack of theatrics that helps make these home-front mysteries so compelling"--E! Online

"What can I say about the show other then I loved it?"--Shakefire.com

"In case you don't know it yet, Foyle's War is one of the best shows on the tube."--Quick Stop Entertainment

"This original, inventive series from Britain is back."--San Francisco Examiner

"These shows are a fascinating look at a period not often plumbed for drama."--MSN Entertainment

"The placid, thoughtful, unruffled performance of Michael Kitchen as the laconic Detective Chief Superintendent Christopher Foyle sets the tone for these composed but complicated meditations on war, the rule of law, and personal responsibility in the face of societal change."--DVD Talk
Awards
Lew Grade Award Winner (2003)