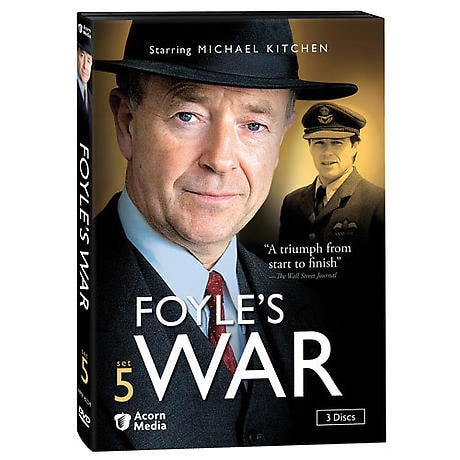 $49.99 $39.99
Buy 2 or More Sets, Save 10%
Share Me:
add to wish list
Overview
Combining uncompromising historical accuracy with compelling mysteries, this acclaimed PBS series comes to an emotional conclusion with three feature-length episodes. Michael Kitchen (Out of Africa) stars as DCS Christopher Foyle, investigating wartime crimes in an English coastal town. With the end of World War II slowly but inevitably approaching, Foyle and his fellow citizens learn the price of victory and face a peace that will transform their lives in unexpected ways. Approx. 300 minutes, 3 DVDs.
Episodes
Disc 1
Plan of Attack
April 1944. DS Milner's investigation of a transportation fraud sets in motion a series of events that brings Foyle back to the force. As Hastings hosts an ecumenical conference on the morality of continued Allied bombing, Foyle probes the suspicious death of a young cartographer from the Air Ministry office.

Disc 2
Broken Souls
October 1944. At a psychiatric clinic treating troubled soldiers, the investigation of a doctor's murder turns up no shortage of suspects among the patients and staff. It also complicates Foyle's friendship with Dr. Josef Novak, the Polish refugee who heads the clinic.

"Michael Kitchen as Foyle is a pleasure to watch."--DVD Talk

"As always, the production values are superb: the show captures the fortitude, the longing, the deprivations of a country at war." --Metro Newspapers Silicon Valley (CA)

"One of the best shows on British television...But what was best about Foyle's War was that the mysteries were damned clever."--Vancouver Voice

"And there's always an absorbing whodunit (or mad bomber, or rogue pilot, or warped priest) and a psychological twist to keep things interesting."--EW.com

"One of the all-time great mystery series on television."--New York Sun

"History meets mystery and the results are astounding"--Blogcritics Magazine