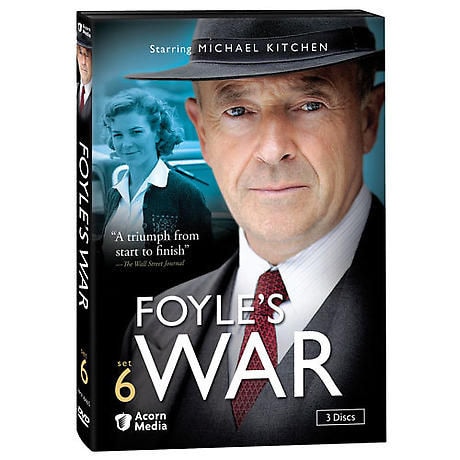 $49.99 $39.99
40 Reviews Write a Review
Item #: XA1542
Returning for a three-episode encore, this enormously popular, award-winning mystery series stars Michael Kitchen (Out of Africa) as Detective Chief Inspector Christopher Foyle, a police investigator in the British coastal community of Hastings. In the immediate aftermath of World War II, Foyle finds his longed-for retirement interrupted by cases involving international intrigue, military racism, and an accused traitor all too END_OF_DOCUMENT_TOKEN_TO_BE_REPLACED
Buy 2 or More Sets, Save 10%
Add to Wish List

Disc 1
The Russian House
June 1945. Tracking an escaped Russian POW at the behest of British intelligence, Foyle becomes involved in a murder investigation conducted by his former subordinate, DI Paul Milner. The situation threatens not only their already strained relationship, but also Foyle's life.

Disc 2
Killing Time
July 1945. While African American GIs wait for transport home, racial tensions run high at the army base in Hastings--particularly when a black American serviceman becomes romantically involved with a white local woman. Then a series of nighttime holdups adds to the town's concerns and leaves Foyle puzzled.

Disc 3
The Hide
August 1945. Foyle probes the mysterious motives of James Devereaux, a former POW and member of the British Free Corps, who refuses to defend himself against treason charges. Meanwhile, Milner investigates the murder of a young woman rooming with the Devereaux family's housekeeper.

"Michael Kitchen as Foyle is a pleasure to watch."--DVD Talk

"As always, the production values are superb: the show captures the fortitude, the longing, the deprivations of a country at war." --Metro Newspapers Silicon Valley (CA)

"One of the best shows on British television...But what was best about Foyle's War was that the mysteries were damned clever."--Vancouver Voice

"And there's always an absorbing whodunit (or mad bomber, or rogue pilot, or warped priest) and a psychological twist to keep things interesting."--EW.com

"One of the all-time great mystery series on television."--New York Sun

"History meets mystery and the results are astounding"--Blogcritics Magazine