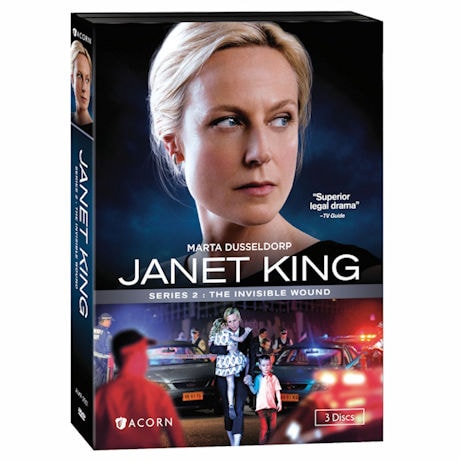 Marta Dusseldorp (A Place to Call Home, Jack Irish) returns as senior crown prosecutor Janet King in this enthralling Australian legal drama. Still devastated by the unsolved murder of her partner, Ash, two years earlier, she's tasked with heading a royal commission into serious firearm crime. As she comes closer to finding the killer who tore her family apart, she makes herself a target. 8 episodes, 7 ¾ hrs, 3 DVDs, SDH. Mature audiences.

The Invisible Wound
A recent murder is the latest in over a dozen committed with illegal handguns in the last 15 months and the Attorney-General assigns Janet to a Royal Commission to investigate the crimes with Owen, Richard, Lina and Andy assisting her. Janet is also dealing with Ash's murder.

Here and Now
Janet experiences personal trouble with Ash's sister, while the Commission thinks people know more about the shooting than they're willing to admit. Someone offers to provide information about the illegal handguns in exchange for immunity but winds up in a predicament of their own.

In Plain Sight
Janet requests that Bianca be a part of an undercover operation, and asks Richard to help her with her case against Ash's sister.

Apprehended Violence
Richard supervises the federal police disarming while others visit a council meeting and witness an interesting altercation. A judge makes a ruling in Janet's favor, but then her iPad is stolen. Corruption officers begin an investigation and Janet gets pressure to deliver a report. Andy is recognized as a police officer and is fired upon.

The Thaw
Bianca saves Andy's life while more guns are found and DNA evidence provides some much needed proof. A pregnancy is announced and a tryst develops and another liaison is discovered. An anagram reveals a new truth.

The Heart of It
An interview reveals further truths, and Janet is encouraged to resign prior to the SCC investigation. Janet's iPad is returned and Richard tells her that once the Commission is over he plans to do his bar exams. Janet announces she is suspending the Commission after asking Owen and Bianca to set a trap.

The Long Goodbye
Janet & Owen witness the sale of the handguns to a biker gang. A killer with a loaned gun now plans to target Janet.