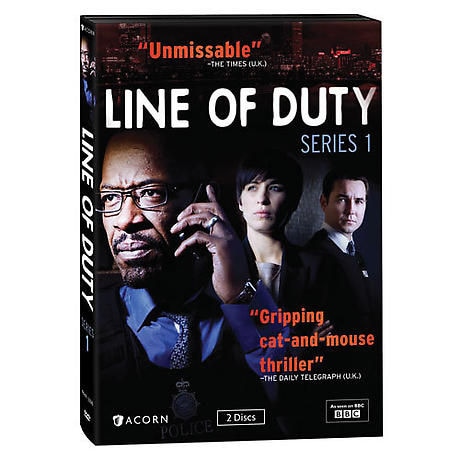 $39.99 $24.99
Share Me:
add to wish list
Overview
Detective Chief Inspector Tony Gates (Lennie James, The Walking Dead) is an exemplary cop. He's got the best crime figures on the force and a loyal team working under him. But the head of the police anticorruption unit, Superintendent Ted Hastings (Adrian Dunbar, Ashes to Ashes), has his doubts about Gates. Is he really that good? And more importantly, is he really that clean? Hastings decides to find out and calls on a new arrival to his department, Detective Sergeant Steve Arnott (Martin Compston, Monarch of the Glen), to help him do it. As the net tightens around Gates, reputations are on the line-and lives are at risk. 5 episodes on 2 DVDs, approx. 305 minutes, SDH.
Episodes
Disc 1
Episode 1
DS Steve Arnott is thrilled to be joining the anticorruption unit-until he learns the target of his first investigation is the well-respected DCI Tony Gates. Though Gates's professional conduct appears above reproach, his private life may provide his enemies the evidence they seek.

Episode 2
After winning Gates's trust, new team member DC Kate Fleming begins to pay close attention to his work. Scrambling to cover his tracks, Gates fears he is about to lose the two most important things in his life-his career and his kids.

Episode 3
Witness to a murder, Gates realizes he has more to cover up than his own misdeeds. Meanwhile, an increasingly confrontational Arnott closes in on Gates, prepared to take more and more risks to bring him down.

Disc 2
Episode 4
With Arnott off the case, Fleming plays on her relationship with Gates in an effort to uncover the truth. In the process, she brings on herself the attentions-and suspicions-of Gates's loyal lieutenant, DC Morton.

Episode 5
Tensions erupt between Hastings, Arnott, and Fleming as they decide on the next steps in the case. Unwilling to await his fate, Gates goes on the run, ready to play one desperate last card to show that everything he did was in the line of duty.
Details
Packaging: Boxed set
Run Time: 305 minutes
Format: Widescreen
Number of Discs: 2
Language: English
Subtitles: No
Color or B&W: Color
CC: No
SDH: Yes
Region Code: 1
Aspect Ratio: 16:9
Rating: NR. Contains course language and violence.
Press
"Twisty cop corruption drama" --The Guardian (UK)