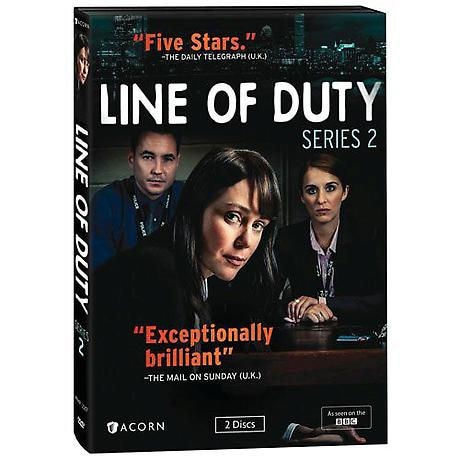 $39.99 $24.99
Share Me:
add to wish list
Overview
Like other police units, AC-12 catches criminals-but the offenders it investigates are fellow officers. When a police convoy is ambushed, leaving three cops dead and a protected witness seriously injured, AC-12 focuses its attention on the one officer who managed to escape the attack unscathed: Detective Inspector Lindsay Denton (Keeley Hawes, Spooks, Ashes to Ashes).

Under the direction of Superintendent Ted Hastings (Adrian Dunbar, Ashes to Ashes), partners Detective Sergeant Steve Arnott (Martin Compston, The Great Train Robbery, Ice Cream Girls) and Detective Constable Kate Fleming (Vicky McClure, This is England, Broadchurch) begin to put the pieces of the case together. Their investigation takes them ever higher up the police hierarchy, all the way to the top ranks of the force. Hailed as "the most enjoyable series the BBC has produced in a long time" (Sunday Times, U.K.), the thriller is "back with a bang" (Daily Telegraph, U.K.) in this six-part second series. 2 DVDs, approx. 369 minutes, SDH.
Episodes
Disc 1
Episode 1
After a police convoy is ambushed, the investigation centers on DI Lindsay Denton, the sole survivor. Why did Denton allow a police convoy to proceed without backup and without firearms? Why take the route she did? How did the ambushers know? Denton quickly goes from valuable witness to prime suspect.

Episode 2
Evidence against Denton begins to mount, but she won't go down without a fight. The increasingly erratic detective begins to uncover past actions that put her investigators--DS Arnott, DC Fleming, and Superintendent Hastings--on the defensive.

Episode 3
Targeted while in prison, Denton confides to Fleming why she thinks she is being set up. Meanwhile, the mutilated body of a teenage girl is found buried under a collapsed garage door.

Disc 2
Episode 4
Denton alleges a high-level conspiracy and cover-up. Only when she is granted special dispensation to leave prison to visit her dying mother do Arnott and Fleming begin to realize the danger she is in.

Episode 5
While Denton fights for her life, details emerge of her relationship with a senior police officer. Hastings faces the prospect of having to confront a superior who holds the superintendent's future in his hands.