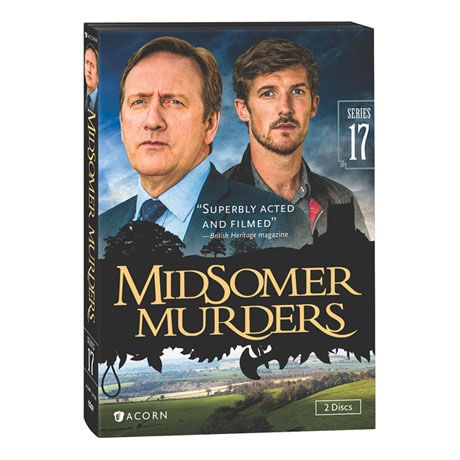 $49.99 $41.99
Share Me:
add to wish list
Overview
Barnaby (Neil Dudgeon) and partner Nelson (Gwilym Lee) face a new raft of bizarre crimes: a fatal electrocution by booby-trapped roulette wheel, a pub landlady crushed to death during a magic show, the drowning of a folk festival organizer in a bowl of eggs and live eels, and the launch of a new English sparkling wine in glasses laced with slug poison. All while Barnaby juggles life as a new dad. Midsomer Murders Series 17 includes 4 cases, 2 DVD or Blu-ray discs, SDH. Mature audiences.


Episodes
Disc 1
The Dagger Club
Book-cover artist Suzie Colebrook is electrocuted to death shortly after a hotly anticipated manuscript is stolen from her home. The missing book was a newly discovered mystery by George Summersbee, author of the popular Dagger detective series, who died three years prior. When Nelson realizes that Suzie's death mirrors a plot line from the first Dagger novel, he and Barnaby race to put the killer out of circulation.

Murder by Magic
At a fundraiser for St. Cyprian's Church, a magic trick by famed illusionist Gideon Latimer goes horribly awry, killing the pianist. What at first appears to be an accident turns out to be sabotage. Barnaby and Nelson wonder whether the victim was the intended target and if the murder could be connected to tensions between the church curate and a local pagan group. The detectives must see through a fog of misdirection to find the culprit.

Disc 2
The Ballad of Midsomer County
The Lower Crosby Folk Festival commences on a sour note when the event's organizer is found drowned in a bowl of eels and eggs, evoking a lyric from the folk classic "The Ballad of Midsomer County." Was the man killed by one of the town's merchants, incensed by his plan to move the festival to London? And why does legendary folk singer Johnny Carver, who committed suicide 20 years ago, cast such a long shadow over the events?