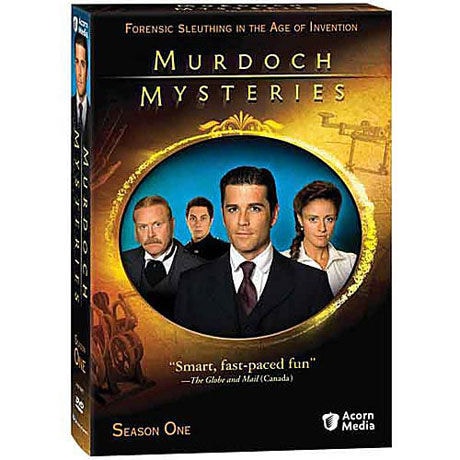 Episode 2: The Glass Ceiling
A trunk delivered to Inspector Brackenreid contains a lawyer's naked corpse and a taunting note. When a second trunk turns up--complete with another body and note--Murdoch races to find the killer before his boss becomes the next victim.

Episode 3: The Knockdown
After celebrating a big win, boxer Amos Robinson goes down for the count, courtesy of a gunshot to the chest. A witness finds Robinson's wife, Fannie, standing over the body and holding a pistol, but Murdoch aims to prove her innocence.

Episode 4: Elementary, My Dear Murdoch
Murdoch accompanies his hero--the famed writer Arthur Conan Doyle--to a seance, where the medium guides him to the body of a skeptical psychic investigator. Did the clues indeed come from the spirit world? Or did the medium have a motive for murder?

Episode 5: Till Death Do Us Part
When Wendell Merrick dies from a blow to the head immediately before his wedding, the case looks like a simple robbery gone wrong. But questions about the groom's gallivanting ways lead Murdoch into Toronto's homosexual subculture.


Disc 2
Episode 6: Let Loose the Dogs
A murder brings Murdoch face to face with his troubled past, as the detective's estranged father turns up drunk near the crime scene. Losing his usual objectivity, Murdoch seems dead set on proving his father's guilt.

Episode 7: Body Double
When a corpse crashes through a theatre's ceiling and lands onstage in the midst of Macbeth, Murdoch and Brackenreid delve into the backstage intrigues of the city's leading Shakespearean acting troupe.

Episode 8: Still Waters
Boys playing on the lakeshore discover the bruised, beaten body of Richard Hartley--scion of a wealthy family and the newest addition to the exclusive King's Club rowing team. Investigating the case, Murdoch finds dark secrets beneath a gleaming world of privilege.

Episode 9: Belly Speaker
Ostensibly researching a new detective novel, Arthur Conan Doyle returns to Toronto and meddles in a case involving a mad ventriloquist who seems to have murdered his father. Murdoch begins to suspect that the author has a hidden agenda.


Disc 3
Episode 10: Child's Play
Who could have murdered Howard Rookwood? Everyone admired the well-known philanthropist, killed in the horse paddock of his glue factory. When suspicions fall on boys employed at the factory, Murdoch uncovers another side to the victim's character.

Episode 11: Bad Medicine
After a mysterious hooded figure kills a prominent psychiatric researcher, Murdoch investigates the doctor's former patients. The case grows more complex when a psychic warns Murdoch that the grim reaper will claim more victims--including the detective himself.

Episode 12: The Rebel and the Prince
The murder of a girl connected to the Irish Brotherhood leads police to suspect a plot against visiting Prince Alfred. Constable Crabtree joins the prince's retinue and finds His Highness more than a handful to guard.

Episode 13: The Annoying Red Planet
When a reclusive woodworker and amateur astronomer is found hanging high in a tree, mounting evidence points to one conclusion: he was murdered by Martians. Constable Crabtree becomes convinced of an imminent alien invasion, but Murdoch searches for more earthly answers.

"This is a show that perhaps you haven't heard much of, but it is truly outstanding. Check this out right away!"--Fort Bend Star (Texas)