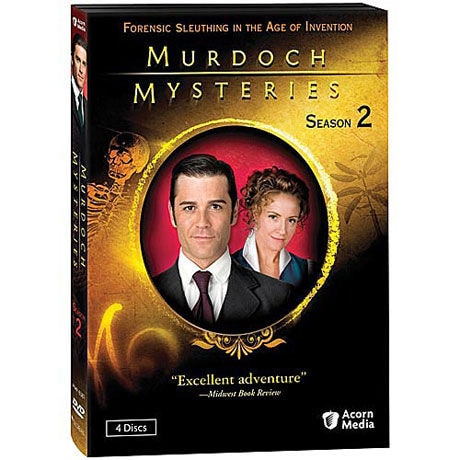 $59.99 $29.99
1 Review Write a Review
Item #: XA2842
Winner of two Gemini® Awards, this sassy-smart Victorian-era whodunit stars Yannick Bisson as Detective William Murdoch, a police investigator who employs emerging science to solve Toronto's most dreadful murders. He experiments with ballistics, psychological profiling, and other newly developed techniques, despite the doubts of his tradition-bound boss (Thomas Craig, Where the Heart Is). Together with a beautiful pathologist (Gemini®-winner Helene END_OF_DOCUMENT_TOKEN_TO_BE_REPLACED
Add to Wish List

Winner of two Gemini® Awards, this sassy-smart Victorian-era whodunit stars Yannick Bisson as Detective William Murdoch, a police investigator who employs emerging science to solve Toronto's most dreadful murders. He experiments with ballistics, psychological profiling, and other newly developed techniques, despite the doubts of his tradition-bound boss (Thomas Craig, Where the Heart Is). Together with a beautiful pathologist (Gemini®-winner Helene Joy, Durham County) and an able protege (Jonny Harris, Hatching, Matching & Dispatching), Murdoch encounters some of the era's most famous--and infamous--figures, from Buffalo Bill Cody to Jack the Ripper. Seen on public television, based on the novels by Maureen Jennings. Season Two nominated for six Gemini® Awards, including best writing and best supporting actor. 13 episodes, approx. 10 hours, 4 DVD or 3 Blu-ray discs, SDH.

Episode 1: Mild, Mild West
When a stunt goes wrong at Buffalo Bill's Wild West Extravaganza, it's up to Murdoch to decide whether it was murder or a tragic accident. In a camp full of sharpshooters, everyone is a suspect--even the famous Annie Oakley.

Episode 2: Snakes and Ladders
A brusque Scotland Yard detective arrives in Toronto convinced that Jack the Ripper is within his grasp. Murdoch must race against time to catch the killer--and brush up on his foxtrot--after he invites Dr. Ogden to an exclusive gala.

Episode 3: Dinosaur Fever
Famed paleontologist Barkeley Blake is in town to premiere his latest discovery, but Murdoch's evening with Dr. Ogden is ruined when the event becomes a crime scene. While tracking the killer, the team discovers that the bone hunters are involved in blackmail, sabotage, and secret romances.

Episode 4: Houdini Whodunit
A bank robbery and two murders seem to implicate the brash young Harry Houdini. His flirtatious assistant--who happens to be Dr. Ogden's sister--is convinced the illusionist is innocent. While the women vie for Murdoch's attention, Inspector Brackenreid is determined to keep Houdini in chains.

Episode 5: The Green Muse
An "experiment" with absinthe following the murder of an escort finally brings Dr. Ogden and Murdoch together. Meanwhile, the Temperance League increases its pressure on the force to rid the city of vice--including the Music Room, a brothel frequented by Toronto's elite.

Episode 6: Shades of Grey
When a young woman is found dead in a creek, Murdoch must investigate a man from Dr. Ogden's past. Their fledgling relationship is threatened by differences of opinion regarding abortion, and Murdoch nearly loses his objectivity while tracking those responsible for the victim's death.

Episode 7: Big Murderer on Campus
At first glance, the murder of a physics professor seems to be the perfect crime. Murdoch tries to call on Dr. Ogden for help, but their relationship remains strained. In the meantime, Constable Crabtree has his own mystery to solve: discovering the true identity of his mother.

Episode 8: I, Murdoch
A young boy comes to the station with a strange report about a giant knight, but Murdoch brushes it off as a tall tale. When the boy goes missing after two bizarre murders and the appearance of a Prussian assassin, Murdoch begins to suspect something more sinister.

Episode 9: Convalescence
Murdoch, severely injured while pursuing a suspect, finds himself bedridden with two women competing for his affections: Dr. Ogden and Enid, a beautiful young widow. Constable Crabtree takes the lead on Murdoch's case, but he can't seem to impress Inspector Brackenreid with his detective skills.

Episode 10: Murdoch.com
Murdoch's relationship with Enid continues to grow; when a mysterious killer begins stalking telegraph operators in Toronto, he calls on her for help. Meanwhile, Inspector Brackenreid's quest to stop drinking has made him increasingly erratic, and Dr. Ogden begins to worry about his health. Episode 11: Let Us Ask the Maiden
The death of a factory worker in Toronto's insular Jewish ward reveals his star-crossed romance with the wealthy factory owner's daughter. As the investigation proceeds, Murdoch learns that several of the ward's inhabitants--rich and poor-- have motives to kill.

Episode 12: Werewolves
A savage killing--seemingly committed by an animal--has some people convinced that a werewolf is on the prowl. As Murdoch searches for a logical explanation, he finds himself again torn between his feelings for Enid and his lingering affection for Dr. Ogden.

Episode 13: Anything You Can Do...
A murder investigation is alternately thwarted and aided by a mounted policeman who otherwise seems both competent and meticulous, much to Murdoch's irritation. His annoyance increases when it seems that the interloper has impressed Dr. Ogden with more than his crime-solving skills.

"This is a show that perhaps you haven't heard much of, but it is truly outstanding. Check this out right away!"--Fort Bend Star