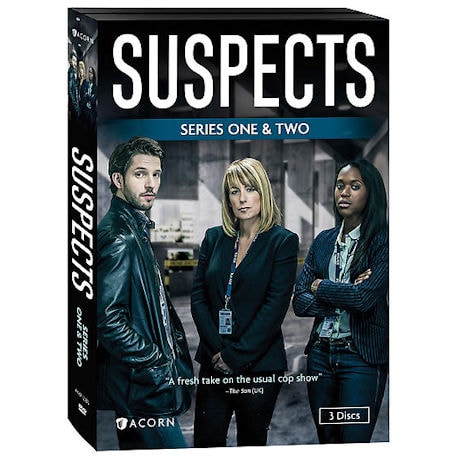 DS Jack Weston (Damien Molony, Being Human), DC Charlie Steele (Clare-Hope Ashitey, Children of Men), and DI Martha Bellamy (Fay Ripley, Cold Feet) investigate a series of crimes in modern-day London, from missing persons to murders and drug overdoses. The episodes are unscripted and the actors improvise the dialogue, giving the program a unique edge and the "insider" feel of a documentary. 9 episodes, 3 DVDs, SDH.

Series 1, Episode 1
A two year old child is reported missing. Her father and his estranged wife are questioned along with their son, Is it a simple kidnap case or is there more than meets the eye?

Series 1, Episode 2
The police are called to the Green Pit night club, whose owner has been assaulted though his sister has sustained very severe head wounds, putting her in a coma. Then a body is found in an alley way. Jack goes after the security chief since the CCTV footage is missing.

Series 1, Episode 3
Martha and her team investigate a rape by the canal. The latest victim's husband is a chief superintendent at the station.

Series 1, Episode 4
A wealthy, terminally ill business man is keen to die and end his suffering. His doctor calls the police when she finds him unconscious after she heard him argue with somebody.

Series 1, Episode 5
A young girl is stabbed in a park at night but manages to flag down a taxi which takes her to hospital, where she unfortunately dies. Charlie and Jack interview the cab driver who had no motive and yet did not ring for the police.

Series 2, Episode 1
A barrister is tied-up and attacked with a hammer. Was this a sex-attack or the work of the paranoid schizophrenic next door?

Series 2, Episode 2
When a second man is attacked with a hammer, the team fear that the culprit is the paranoid schizophrenic they let out on bail.

Series 2, Episode 3
The team uncover a vicious pedophile ring, but are forced to bail their prime suspect. So Jack takes the law into his own hands.

Series 2, Episode 4
Jack is found at the scene of the murder of a pedophile, covered in his blood. Has Jack taken the law into his own hands?