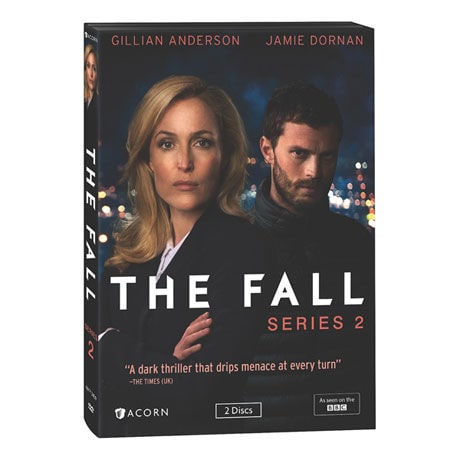 $39.99 $24.99
Share Me:
add to wish list
Overview
A charismatic serial killer, a steely detective hot on his trail. The harrowing story begun in Series 1 picks up where it left off. Paul Spector (Jamie Dornan, Fifty Shades of Grey) has fled Belfast, and DS Stella Gibson (Gillian Anderson, The X-Files) is running out of time to catch him. Then Spector commits a crime to silence someone from his past, and Gibson finds crucial evidence. Critics and audiences are raving about this tense, intelligent BBC drama. 6 episodes, 6 3/4 hrs, 2 DVD or Blu-ray discs, SDH. Mature audiences.
DVD Extras

"Relentlessly original, consistently gripping" - The Guardian (UK)
"Anderson is magnificent" - Daily Record (UK)
"Electrifying and terrifying" - The Sunday Telegraph (UK)
"Fantastically gripping, unexpected, and creepy" - Daily Mail (UK)
"An intriguing game of cat and mouse" - The Sunday Times (UK)
"One of the best BBC dramas in years" - The Guardian (UK)
"Anderson is sublime, almost otherworldly, while Dornan...matches her for icy charisma" - The Daily Mail (UK)
"The best, most compelling show on television...fantastically gripping" - Daily Mail (UK)
"A Silence of the Lambs-style game of wits" - Mail on Sunday (UK)
"Rating: A. Electric with suspense...Anderson's performance is riveting." - Entertainment Weekly
"One of the most complex women we've seen on TV since Homeland's Carrie. Miss this at your peril." - The Sun UK)
"Addictive and provocative...the closest that television has come to capturing the taut alchemy of Prime Suspect." - The Daily Beast
"Masterful and terrifying" - The Guardian (UK)
"A dark thriller that drips menace at every turn" - The Times (UK)

Sichuan TV Festival, Gold Panda Award Nomination - Best Performance by an Actress in a Mini-Series or Motion Picture Made for Television (Gillian Anderson, 2015)