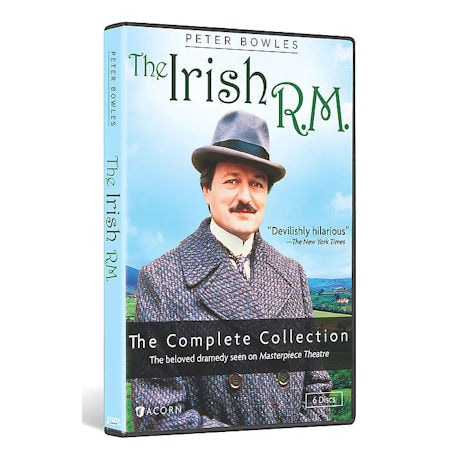 $59.99
Share Me:
add to wish list
Overview
Peter Bowles (Rumpole of the Bailey) gives a wry, warm, and winning performance as Major Sinclair Yeates, a "fine gentleman from England" who arrives in turn-of-the-20th-century, pre-Independence Ireland to find he's a fish out of water. Filmed in Ireland, based on books by the Anglo-Irish novelists Somerville and Ross, this Masterpiece Theatre favorite first aired in the 1980s. 18 episodes, 15 3/4 hrs, 6 DVDs, SDH.

Packaging: Boxed set
Run Time: 16 hours, plus bonus programming
Format: Full screen
Number of discs: 6
Language: English
Subtitles: No
Color or B&W: Color
CC: No
SDH: Yes
Region Code: 1
Aspect Ratio: 1.33:1
Audio Format: Stereo
Rating: NR.
Other: Due to the age of these programs and the improved resolution that DVD provides, you may notice occasional flaws in the image and audio on this DVD presentation that was beyond the studio's ability to correct from the original materials.