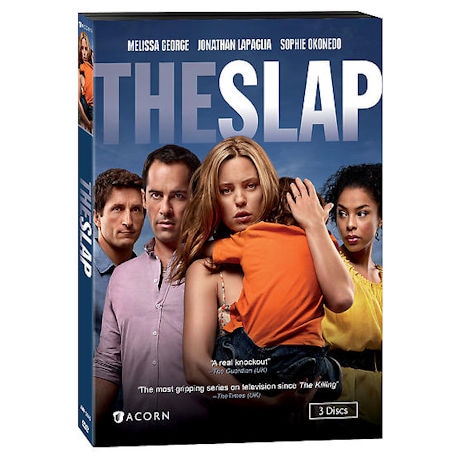 Disc 1
Episode 1: Hector
On the day before his 40th birthday, Hector and his wife, Aisha, host a backyard barbecue with their family and friends to celebrate. But Hector is more preoccupied with daydreaming of his children's babysitter, Connie, than with the festivities. When his cousin slaps another guest's unruly child, the party quickly ends and tensions escalate.

Episode 2: Anouk
Struggling with her highly demanding job, her insecurities about dating a much younger man, and her ailing mother, Anouk isn't interested in being drawn into the drama surrounding the slap. When unexpected news adds to her stress and tips her over the edge, she may lose the good things she has left.

Episode 3: Harry
As a successful business owner, Harry leads a rich and privileged life. When assault charges are pressed against him for the events at the barbecue, his perfect world begins to unravel, and his uncontrollable anger threatens to undo him.

Episode 4: Connie
Appalled by what she saw at the barbecue, Connie remains loyal to Rosie as a case is built against Harry. Meanwhile, Connie's feelings for Hector grow stronger, even though he tries to break off their relationship. After being slighted, she tells a lie with disastrous consequences.

Disc 2
Episode 5: Rosie
When Rosie receives notice of the court date, she is hopeful that Harry will be convicted. But her determination to win the case is pushing her friends and family ever further away. As her relationships--particularly her marriage--grow strained, Rosie realizes she doesn't have the support she thinks she deserves.

Episode 6: Manolis
Family patriarch Manolis is heartbroken watching the strain that the slap has put on his loved ones. With his old friends dying, he is suddenly confronted by his own mortality, and he struggles to understand the younger generations.

Episode 7: Aisha
Even though the trial has ended, the stress of the situation has stirred up old hurts for Aisha. Once the rock of her family, she is now full of doubts about her marriage, the future, and especially about hiding a family secret. At a work conference she meets a handsome young stranger who provides a distraction from the situation.

Episode 8: Richie
Anxiety over keeping Connie's secret pervades Richie's every thought and provokes an unhealthy obsession with trying to expose Hector. When the lies come to light in an ugly confrontation, Richie is driven to a desperate act.