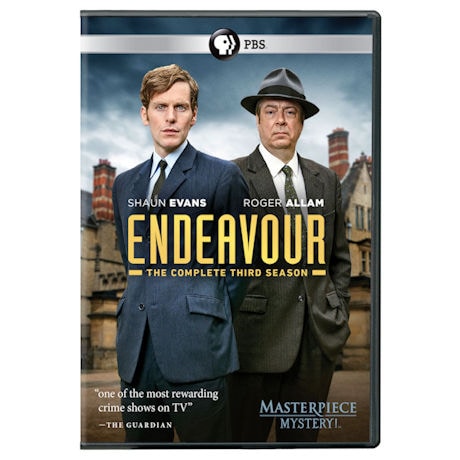 Starting at $39.99
Buy 2 or More Seasons, Save 10%
Share Me:
add to wish list
Overview
Shaun Evans (The Take) returns as the younger version of crusty Inspector Morse, brilliantly portrayed by the late John Thaw, in a prequel "worthy of the Morse name" (Sunday Telegraph, UK). Endeavour is out of prison but on suspension, and DI Fred Thursday (Roger Allen, The Iron Lady) is coping with the aftereffects of a life- threatening injury. Set in Oxford in the 1960s, seen on Masterpiece Mystery! 4 feature-length episodes. 6 hrs, 2 DVDs or Blu-ray discs, SDH. Mature audiences.
Episodes

Ride
While recuperating in a wooden shack in the forest, Morse is drawn into the complex lives of the rich people across the lake.

Arcadia
The death of an artist in a horrendous house fire leaves Oxford City Police baffled as to the cause of the blaze.

Prey
The detectives are called in to deal with the case of a missing au pair who disappeared after her evening class at night school.

Coda
As Endeavour Morse takes his sergeant's exam, a garment factory owner is shot dead outside a bank during a wage snatch.

Satellite Award Nomination for Best Miniseries Made for Television (2014)