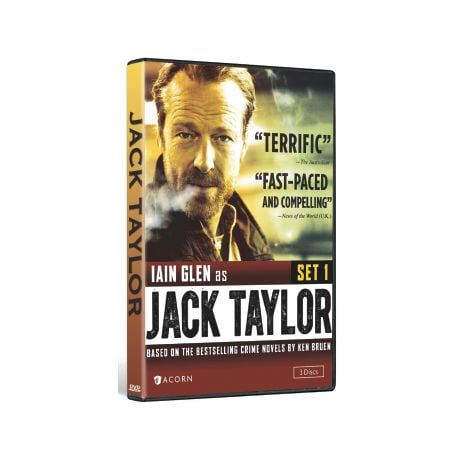 The Guards
Jack Taylor, a sergeant with the Gardaí Síochána, hands in his resignation after being told he would receive the boot for assaulting a politician. When he's contacted by a distraught mother whose daughter has supposedly disappeared, he agrees to investigate. Jack eventually discovers crimes involving a local factory, illegal sex videos, and suspicious deaths. Jack also realizes that his closest friend may also be his closest enemy.

The Pikemen
Jack agrees to look into a suspicious death and discovers several other victims who may have died under mysterious circumstances. Jack learns of a vigilante groups knows as 'The Pikemen' who appear to be attacking people that were supposedly not convicted of their crimes. Assisted by eager young investigator Cody, they make new discoveries in the case. Jack re-connects with a former contact and finds her in an abusive relationship with a local businessman. When the businessman winds up dead, a victim of the Pikemen, Jack is arrested and realizes that the only way to prove his innocence is to rely on Cody.

The Magdalen Martyrs
Jack is hired to track down a sadistic nun known as Lucifer. The investigation is hampered by church records that have vanished. Jack discovers a 50-year old family secret that leads him to the nun's identity and an unexpected connection. Jack is threatened by a local criminal and is forced to hand over the only evidence that will lead him to Lucifer and he fights to get it back - with tragic consequences.