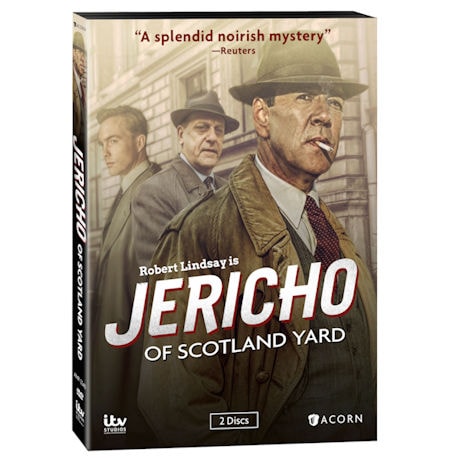 $49.99 $39.99
Share Me:
add to wish list
Overview
Post-WWII London is a city of seismic changes - and brutal murders. Set in the 1950s, first broadcast on PBS in 2005, this acclaimed British detective drama stars Robert Lindsay (Hornblower) as Chief Inspector Michael Jericho, who solves crimes and fights for justice as the city shifts around him. With David Troughton (New Tricks) as Sgt. Clive Harvey and guest starts including Brendon Coyle (Downton Abbey). 4 feature-length mysteries, 7 hrs, 2 DVDs, SDH.
Episodes
A Pair of Ragged Claws
Jericho investigates the brutal murder of a young Jamaican in Notting Hill and soon identifies it as a racial killing. His work on this case is soon interrupted when a wealthy businessman is kidnapped.

The Killing of Johnny Swan
A year after Johnny Swan wins an important race against a Soviet runner, he and his three friends are caught up in a rematch and murder.

To Murder and Create
Jericho investigate the garrote murders of two very different individuals, a scientist and a postman.