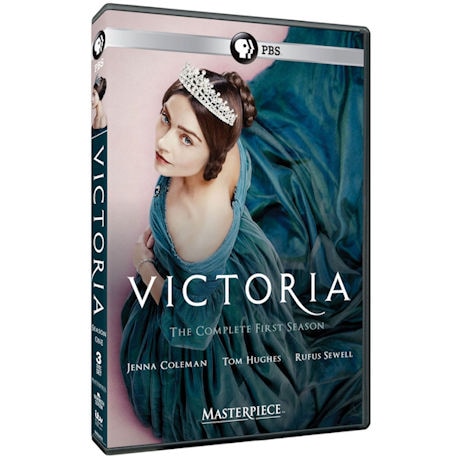 $49.99 $39.99
4 Reviews Write a Review
Item #: XA8522
Jenna Coleman (Doctor Who, Death Comes to Pemberley) stars as young Queen Victoria in this lavish new costume drama from Britain's ITV, soon to air on Masterpiece. Beautifully filmed, exquisitely costumed, it won raves when it aired in the UK and eased the pain of viewers who were pining for Downton Abbey. Series 1 follows the diminutive Victoria from her END_OF_DOCUMENT_TOKEN_TO_BE_REPLACED
Add to Wish List

Jenna Coleman (Doctor Who, Death Comes to Pemberley) stars as young Queen Victoria in this lavish new costume drama from Britain's ITV, soon to air on Masterpiece. Beautifully filmed, exquisitely costumed, it won raves when it aired in the UK and eased the pain of viewers who were pining for Downton Abbey. Series 1 follows the diminutive Victoria from her accession to the throne at age 18 through her courtship and marriage to Prince Albert. With Tom Hughes (Silk) as Albert and Rufus Sewell (Middlemarch) as Victoria's broodingly handsome confidant, Lord Melbourne. "Jenna Coleman excels…stellar performance" (Express, UK). 8 episodes, 8 hrs, Choose 3 DVDs or Blu-ray discs, SDH.

Doll 123
Victoria ascends to the throne after the death of her uncle, King William. She asserts her independence by standing up to her mother and Sir John Conroy, who had both reared her under the strict Kensington System. Victoria creates a scandal involving her mother's lady-in-waiting, Lady Flora Hastings. The public is outraged when they learn of the humiliation that Lady Flora has suffered at Victoria's hands. Victoria is encouraged to stand tall and face the public by the Prime Minister, Lord Melbourne.