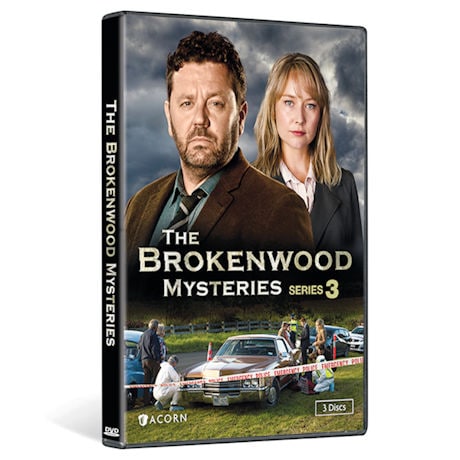 $59.99 $39.99
Share Me:
add to wish list
Overview
Mike and Kristin return to uncover more macabre events in the sleepy little murder-ridden town of Brokenwood. Once more, they're faced with quirky mysteries; a woman found dead under a giant foam spider; one corpse replaced by another; a classic car buff with a lungful of gasoline. Siphoning, or something more sinister? 4 feature-length episodes, 4 DVDs or 2 Blu-ray discs. SDH. Specify DVD or Blu-ray.
Episodes
The Black Widower
The Frog and Cheetah publican, Ray Neilson, has branched into tourism with his 'Lord of the Ringz Tours.' But when Ray's wife is discovered dead under a giant foam spider, things get mirky. But when the cause of death is revealed to be from New Zealand's only native venomous spider - the Katipo - the question becomes how did one spider administer ten times the lethal dose?

Over Her Dead Body
Brokenwood is in mourning at the passing of local poet Declan O'Grady. But things go from sad and bad to worse when his coffin accidentally falls from the hearse revealing that the corpse inside is not Declan but a young woman identifiable only be a notable scarlet tattoo.

The Killing Machine
Charlie Baxter, Chairman of the Classic Car Restoration Society, is found dead next to his beloved El Dorado with a lungful of gasoline. Was this a petrol siphoning accident or something more deliberate? And does his death have anything to do with the unidentified body found in Charlie's garage the day before?

"Engaging, full or twists, and will keep you guessing right till the end" - CheeseonToast.co.nz