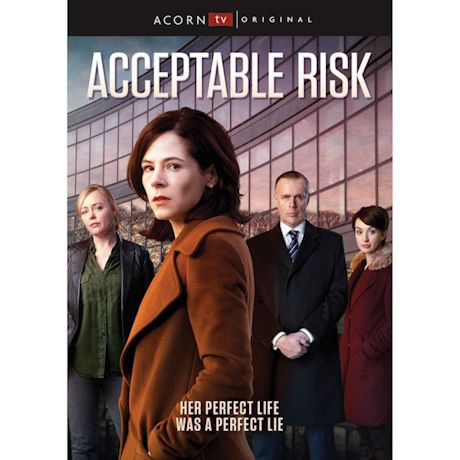 $39.99 $24.99
Share Me:
add to wish list
Overview
When her husband, Lee, is murdered, Sarah Manning (Elaine Cassidy, The Paradise) gradually learns that their perfect life was a perfect lie. What did he do in his work for a powerful global organization? Why did he carry a gun? And why were they both under constant surveillance? Set in the world of Big Pharma, filmed in Dublin and Montreal, this moody Irish thriller also stars Morten Suuballe (Vikings), Angeline Ball (Doc Martin), and Lisa Dwyer Hogg (The Fall). 6 episodes, 2 DVDs or Blu-ray discs. Mature audiences.

We regret we cannot ship Acceptable Risk to Canada.

Item can only be shipped within the Continental US.
Episodes
Episode 1
When the sales executive of a pharmaceutical company is found dead while on business in Montreal, his wife, Sarah, begins to question everything she thought she knew. As the investigation proceeds, Sarah suddenly finds herself under suspicion and her life under surveillance.

Episode 2
Emer Byrne still suspects that Sarah knows more than she says and becomes convinced that Gumbiner-Fischer is hiding something. Sarah grows even more driven to discover who is responsible for her husband's death.

Episode 3
When the case is closed without any convincing explanation for Lee's killing, Sarah determines to uncover the truth on her own. Then she makes an unexpected discovery, proving that Lee clearly knew something he shouldn't have.

Episode 4
Emer ignores her superiors and continues investigating Lee's murder. As more pieces of the puzzle are connected, Sarah attempts to blackmail Gumbiner-Fischer to reveal the complete truth.

Episode 5
Horrified by Hoffman's ruthlessness, Nulty meets with Emer and encourages her to officially reopen the case. Over lunch with her former brother-in-law, Sarah learns new information that could link Lee's murder to her first husband's death.

Episode 6
Sarah confronts Nuala, who confesses everything she knows about the development site; a document left by Duquesne exposes what may have led to Lee's and Ciaran's deaths.