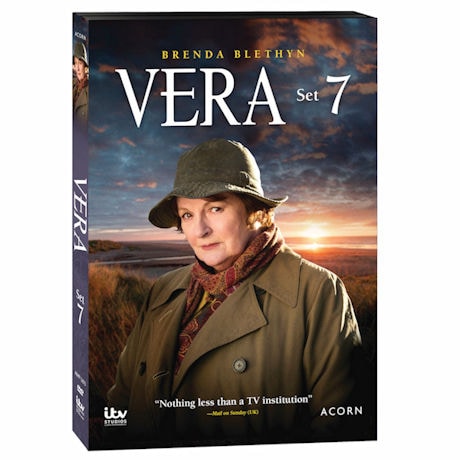 Overview
This season finds Vera and Aiden investigating several mysterious deaths, including a park ranger found washed up on the shores of a remote wildlife reserve, a drug addict, a promising young journalism student, and a woman who had disappeared six weeks earlier. Despite her unconventional ways and abrasive personality, Vera continues to captivate in this long-running British drama that is "sheer heaven for fans of police procedurals" The Philadelphia Inquirer. 4 episodes, 6 hours, 4 DVDs, SDH. Mature audiences.
Episodes
Episode 1: Natural Selection
Vera is drawn into a suspicious death on Ternstone, a remote and inaccessible island off the coast of Northumberland, home only to numerous species of birds and the rangers who observe them.

Episode 2: Dark Angel
The body of a young man is discovered face down in a river by Thrunton Woods. But tracing the victim's identity proves difficult for Vera and her team.

Episode 3: Broken Promise
Vera is called to Northumberland University when a student plummets to his death from the top of a disused faculty building.