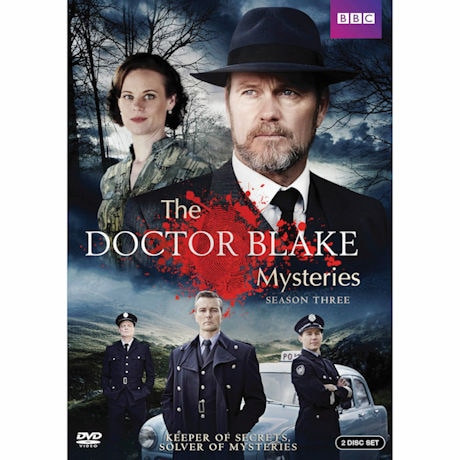 $39.99
Share Me:
add to wish list
Overview
After an absence of 30 years, Dr. Lucien Blake returns home to Australia to take over his dead father's medical practice and his on-call role as the town's police surgeon. Sharp as a tack and sly as a fox, Blake is haunted by memories of WWII and a heartbreaking personal loss. A huge ratings hit in Australia, this period drama stars popular Aussie actor Craig McLachlan (Neighbours), with Nadine Garner as Jean Beazley. "Doc Martin down under" —Daily Mail (UK). 8 episodes, 9 ½ hrs, 2 DVDs. Mature audiences.
Episodes
Episode 1: King of the Lake
When a Ballarat Boys College schoolboy-rower wins a race on Lake Wendouree, only to drown after being ceremonially tossed in the lake, Doctor Blake is called upon to try and determine just what happened to the boy.

Episode 2: My Brother's Keeper
Tragedy strikes when a local farmer is found dead at the bottom of a cow pen at the Ballarat Agricultural Fairgrounds. Locals blame livestock for accidentally trampling the man but Doctor Blake isn't convinced. Why was the victim in the pen in the first place?

Episode 3: The Time and This Place
It's cracker night in Ballarat, and Mattie is present when spirited social worker Emma Keneally brings a small group of Aboriginal children from the local orphanage to enjoy the bonfire and the fireworks.

Episode 4: By the Southern Cross
Tensions are stirred when police forcibly break up a group of students celebrating the Eureka stockade anniversary in Ballarat, Mattie amongst them. Later emotions soon spill over once again at the pub.

Episode 5: A Night to Remember
Famed Australian actress Jacqueline Maddern arrives in Ballarat for a performance at a charity dinner in the Colonists Club. On stage she dazzles the crowd and then moments later collapses, dead.

Episode 6: Women and Children
A patient is rushed into Ballarat Hospital at dawn, urgently needing a life-saving operation. Paramedics and doctors race into the operating room... where they find one of their best surgeons already lying dead on the operating table, his throat cut.

Episode 7: Room Without a View
When local business owner Henry King dies in suspicious circumstances at the Royal Hotel, Blake is assigned the case, along with the newly returned Chief Inspector Matthew Lawson.