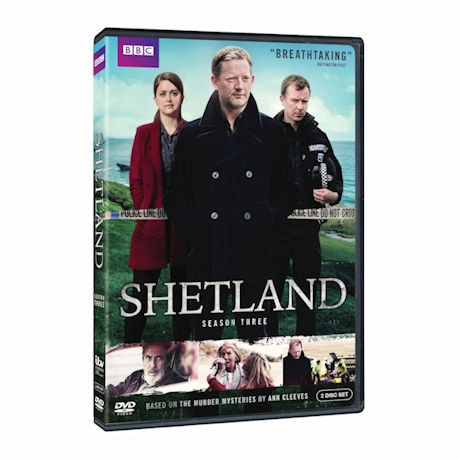 $39.99 $29.99
Share Me:
add to wish list
Overview
Adapted from the crime novels of Ann Cleeves (Vera), this hit BBC Scotland series is filmed against the backdrop of the Shetland Islands. Douglas Henshall (Primeval) stars as good-natured DI Jimmy Perez, who quickly realizes that not all is what it seems in this close-knit community. Henshall exudes authority; his offbeat assistant, DC Alison "Tosh" McIntosh (Alison O'Donnell), adds humor. "Gripping"—Guardian (UK) 6 episodes, over 5 hours, 2 DVDs. SDH.
Episodes
Episode 1
When a young man disappears on the Aberdeen to Shetland ferry crossing and a small boy ends up in intensive care, DI Jimmy Perez and his team investigate and become convinced the two events are connected.

Episode 2
DI Jimmy Perez is convinced that Michael Maguire is somehow implicated in the death of Robbie Morton. But with the investigation seemingly under threat before it's even started, he faces an uphill battle to uncover the truth behind Maguire's silence.

Episode 3
The murder investigation takes Perez and Tosh to Glasgow as they try to uncover the reasons behind Maguire's brutal death and his connection to Robbie Morton. But old ghosts return to haunt Perez as his enemies try to prevent him from getting to the truth.

Episode 4
Perez and his team ae determined to track down the person who helped Michael Thompson's killer on Shetland, but the closer the team get to the truth in both Shetland and Glasgow, the more dangerous it becomes for all of them.

Episode 5
Perez struggles to deal with what has happened to Tosh as he continues to investigate the murders of Robbie Morton and Michael Thompson, but a shocking discovery finally leads him to the identity of who Thompson was going to testify against.

Episode 6
As the investigation reaches its final stages, Detective Inspector Perez and his team discover the person responsible for the deaths of Robbie Morton and Michael Thompson is closer to home than any of them thought.