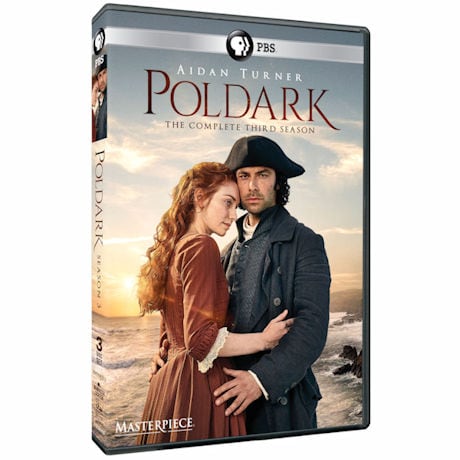 $44.99 Starting at $39.99
Share Me:
add to wish list
Overview
Ross Poldark rides again in the smash hit British series based on William Graham's sweeping 18th-century novels. Aidan Turner and Eleanor Tomlinson return as Ross and Demelza in a season that sees the birth of George Warleggan's son with Elizabeth and more new characters including Demelza's long-lost brothers Sam and Drake. As war and the revolution in France hang over Britain, Warleggan grows his empire with a view to crush the Poldarks, and Ross and Demelza attempt to repair their relationship. 9 episodes, about 9 ½ hrs, 3 DVDs or Blu-ray discs, SDH.
Episodes
Episode 1
Ross and Demelza look to forget the past and rebuild their marriage, but new arrivals threaten their fragile reconciliation.

Episode 3
Ross attempts to learn of Dwight's fate in revolutionary France. Meanwhile, in Cornwall, George and Elizabeth lock horns with Sam and Drake.

Episode 4
George proves merciless as the new magistrate. Baby Clowance is christened. Ross discovers the means to help both Dwight and combat Cornwall's famine, but at what cost to the miners?

Episode 5
While George makes political maneuvers at home, Ross sails to France to rescue Dwight from the French Revolution.

Episode 6
Drake finds himself in the Warleggans' firing line as George moves to secure his connection to the nobility, and Ross provides some local aid.

Episode 7
George pursues a vacant seat in Parliament as Agatha plans for her hundredth birthday and Ross is given a proposition. Meanwhile, there is a new arrival at the Whitworth vicarage.

Episode 8
An election threatens Truro's status quo and as his past actions confront him, Ross senses a rival for Demelza's affections.

Episode 9
French sails on the horizon put Cornwall on alert, placing Ross in command. Demelza continues to be courted by Hugh; and Prudie reveals a secret to Demelza. The future may be more uncertain than ever for the Poldarks.