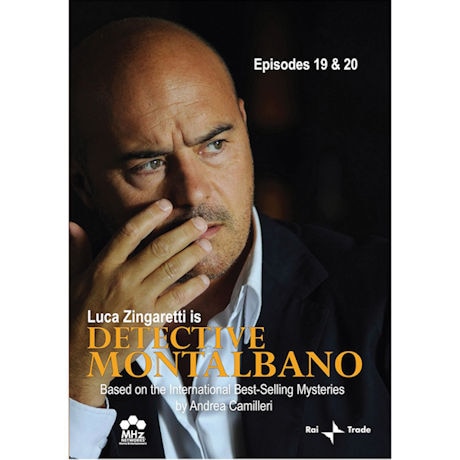 $29.99
Buy 2 or More Episode Sets, Save 10%
Share Me:
add to wish list
Overview
Based on the spectacularly successful Inspector Montalbano mysteries by Andrea Camilleri, this long-running Italian television series is a huge hit in Europe. Luca Zingaretti stars as the grouchy Sicilian police chief who hates bureaucracy and loves Sicily, justice, his girlfriend, Livia, and Sicilian cooking. Filmed in sun-washed Sicily. Includes "The Potters Field ," The Dance Of The Seagull". 5 hrs, 2 DVDs. Italian with English subtitles.
Episodes
EPISODE 19: THE POTTERS FIELD
When a body is found cut into pieces and wrapped in a plastic bag, all signs point to an old-fashioned Mafia-style execution. The case becomes especially complicated for Montalbano when his friend Mimi starts behaving erratically and insists on handling the investigation himself. His first reaction is irritation until he realizes that his colleague may be indirectly involved in the killing. An old friendship gets tested as Montalbano tries to help his friend get out of the most dangerous predicament of his life.

EPISODE 20: THE DANCE OF THE SEAGULL
Montalbano's worst nightmare begins when the father of trusted deputy Fazio reports his son missing. Convinced that he's off on an investigation of his own, which may have gone bad, Montalbano comes across ominous signs of a shootout. A witness reports having seen him captured by two criminals who were talking about throwing him into a dried-up well and the search becomes frantic. Fazio remains missing in action but Montalbano is determined to find his old friend and colleague alive at all costs.