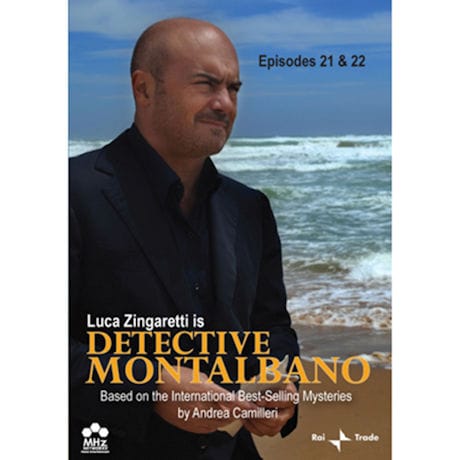 $29.99
Buy 2 or More Episode Sets, Save 10%
Share Me:
add to wish list
Overview
Based on the spectacularly successful Inspector Montalbano mysteries by Andrea Camilleri, this long-running Italian television series is a huge hit in Europe. Luca Zingaretti stars as the grouchy Sicilian police chief who hates bureaucracy and loves Sicily, justice, his girlfriend, Livia, and Sicilian cooking. Filmed in sun-washed Sicily. Includes "The Treasure Hunt ," The Age Of Doubt ". 5 hrs, 2 DVDs. Italian with English subtitles.
Episodes
EPISODE 21: THE TREASURE HUNT
A hyper-religious elderly couple barricade themselves in their home and begin shooting from their balcony for no apparent reason. When a camera crew videotapes Montalbano and his men entering the home, they become overnight heroes. The publicity brings out the kooks, however, and a disturbed maniac begins a macabre treasure hunt with Montalbano, sending him strange riddles linked to the kidnapping and murder of a young girl. Montalbano and his team try to sort out the insanity before a new murder is committed.

EPISODE 22 - THE AGE OF DOUBT
Nothing is as it seems in Inspector Montalbano's investigation of a corpse found at sea. When a young girl arrives from Palermo claiming to meet her aunt, who's pulling into Vigata harbor in a yacht, he discovers a connection between the corpse, the yacht, and a motorboat called "Ace of Hearts". He finds himself attracted to a young Coast Guard officer assigned to help in the case, but there's no time for soul searching when a second corpse shows up and there's a gruesome mystery to solve.