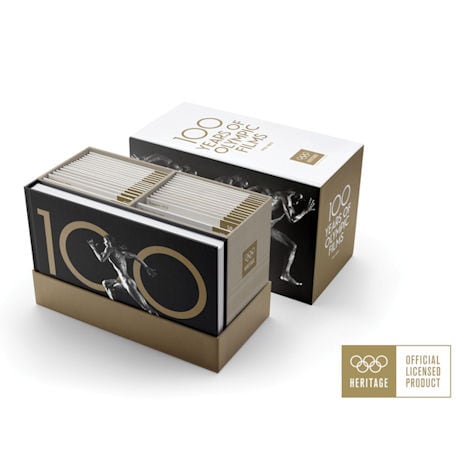 Overview
This remarkable marathon of films from The Criterion Collection offers nothing less than a panorama of a hundred years of human endeavor. This one-of-a-kind collection assembles, for the first time, a century's worth of Olympic films. These documentaries cast a cinematic eye on some of the most iconic moments in the history of modern sports, spotlighting athletes who embody the Olympic motto of 'Faster, Higher, Stronger': Jesse Owens shattering sprinting world records on the track in 1936 Berlin, Jean Claude-Killy dominating the slopes of Grenoble in 1968, Michael Phelp's amazing run of gold medal glory, Usain Bolt's blazing dominance on the track, Joan Benoit breaking away to win the first-ever women's marathon on the streets of Los Angeles in 1984. 43 DVD, 104 hours.

London 1948: Fanny Blankers-Koen, "the Flying Housewife" from the Netherlands, galvanizes the Games at the age of thirty with her gold medals in the 100 meters, 200 meters, 80-meter hurdles, and 4 x 100-meter relay.

Helsinki 1952: The Czechoslovak long-distance runner Emil Zátopek wins gold medals in the 5,000 and 10,000 meters before also winning the marathon, despite never having competed in one before.

Rome 1960: Ethiopian runner Abebe Bikila sets a world best with his barefoot victory in the marathon, becoming the first sub-Saharan African athlete to win an Olympic gold medal. Four years later, he will beat his own record, finishing first in the marathon at the Olympic Games Tokyo 1964—this time wearing shoes.

Mexico 1968: American Bob Beamon soars to a world record in the long jump with an 8.90-meter leap that still stands as the Olympic record today.

Lake Placid 1980: The United States ice hockey team narrowly defeats the heavily favored Soviet Union team in a medal-round confrontation that pulses with suspense up to its final moments—a triumph that becomes known as the "miracle on ice."

Barcelona 1992: In a transition from the Olympic tradition of amateur athletics, the USA assembles a "dream team" of NBA all-stars to take the court. Perhaps the greatest group of athletes ever assembled in a single team, they win the gold medal, beating their opponents by an average of forty-three points per game.