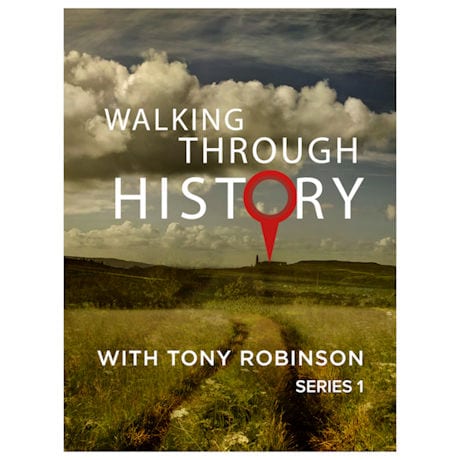 Overview
Appealing to history buffs and dedicated ramblers alike, Tony Robinson embarks on spectacular walks through some of Britain's most historic landscapes in search of the richest stories from Britain's past. In each programme, Tony follows a bespoke route that allows him to explore on foot both the history of a particularly colourful historical period or event, and the spectacular landscape in which those events unfolded. The walks are proper expeditions with each one taking Tony a week. With various experts he encounters on the way, Tony reveals and discovers places and their hidden stories that ordinary walkers and ramblers might otherwise miss. And, as well as the history, Tony infuses each walk with an appreciation of some of the striking landscapes and geographical features Britain contains. 4 episodes, 3 hours, 1 DVD.
Episodes
Episode 1: Frontline Dorset
Tony Robinson embarks on an expedition along Dorset's Jurassic coast to explore the county's hidden Second World War story. On his five-day walk he encounters stunning scenery and uncovers wartime acts of ingenuity and bravery. He also discovers the crucial part a swannery played in developing a secret weapon and reveals the role of Dorset in protecting Britain from invasion during the conflict.
Episode 2: The Birth of Industry
He begins with a trek through the Derwent Valley, where the Industrial Revolution was born, and recounts how Britain transformed itself from a nation of farmers to the powerhouse of the world. The landscape here is incredible; wild, dramatic and romantic. There's also a visit to Haddon Hall, the 900-year-old stately home used to film three different versions of Jane Eyre.
Episode 3: The Tudor Way
Tony Robinson sets off on a 45-mile hike through the countryside of the Weald in Kent and the Downs of East Sussex to discover the area's rich and surprising Tudor heritage. From there, he travels up what used to be secret paths to Hever Castle and finds out how the monarch's reign brought not only huge social, political and industrial change, but also fame and disaster.
Episode 4: Battle in the Glens
In this episode Tony Robinson tackles the harsh climate and dramatic landscape of the west Highlands to chart the equally harsh and dramatic history of the 1719 Jacobite rebellion.