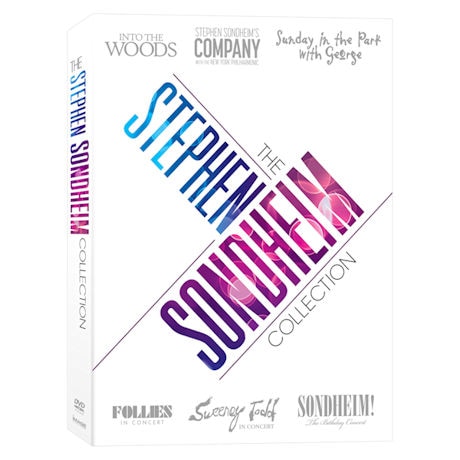 Overview
The genius of Stephen Sondheim in six filmed performances. Includes Into the Woods (1991) starring Bernadette Peters and the original Broadway cast; Company (2011) with Neil Patrick Harris and New York Philharmonic; Sunday in the Park with George (1986) with Mandy Patinkin; Follies in Concert (1986) at Avery Fisher Hall; Sweeny Todd in Concert (2001) with Patti Lupone and the San Francisco Symphony; and Sondheim: The Birthday Concert (2010) with the New York Philharmonic, hosted by David Hyde-Pierce. 13 hours on 6 DVDs. While supplies last.
Episodes
INTO THE WOODS — A baker and his wife journey into the woods in search of a cow, a red cape, a pair of golden slippers and some magic beans to lift a curse that has kept them childless. With oft-recorded songs such as "Children Will Listen" and "No One Is Alone," INTO THE WOODS is a music lover's delight from start to finish--and will forever cement Stephen Sondheim's unparalleled position as the giant of the American musical theater.

COMPANY — Set firmly in, and often about, New York, COMPANY follows five married, once married, or soon to be married couples and their mutual friend, Robert, a 35 year old bachelor who has been unable to connect in a long-term relationship. The relationships are presented in a series of vignettes, primarily through Bobby's eyes, so that we see the less than ideal aspects of commitment. However, it is obvious to the audience that the committed are happy. Eventually, Bobby learns that while relationships aren't perfect, they are a necessary part of "Being Alive."

SUNDAY IN THE PARK WITH GEORGE — A Sunday Afternoon on the Island of La Grand Jatte by Georges Seurat is one of the great paintings of the world, book writer James Lapine and composer/lyricist Stephen Sondheim bring a story based on the work brilliantly to life. While the painting depicts people gathered on an island in the Seine, the musical goes beyond simply describing their lives. It is an exploration of art, of love, of commitment. Seurat connected dots to create images; Lapine and Sondheim use connection as the heart of all our relationships. Winner of the 1985 Pulitzer Prize for Drama.

FOLLIES IN CONCERT — The incomparable Stephen Sondheim brought his sensational Follies to the stage in 1971 where it was hailed as "monumental theater" by The New York Times. Fourteen years later, the magic was recreated by an unparalleled gathering of stage and screen luminaries performing with the New York Philharmonic at Lincoln Center for a wildly enthusiastic audience. This one-night-only performance became a legendary event in Broadway history! The evolution of this unique, historic event is exclusively captured in this film, from the first rehearsal--just four days before the show--to the last second butterflies just before the curtain rose. This is a rare treasure for all fans of musical theater. Includes the memorable songs "Losing My Mind" and "I'm Still Here" and an all-star cast!

SONDHEIM: THE BIRTHDAY — Join us for a rousing celebration of the life and work of one of Broadway's greatest legends - the one and only Stephen Sondheim. For the master composer and lyricist's 80th birthday, many of musical theater's brightest stars gathered to perform more than two dozen sensational numbers from Sondheim's illustrious career. Many of these enduring songs are rarely heard and several are performed by the original Broadway cast members. David Hyde Pierce hosts this magical event with Stephen Sondheim's longtime collaborator Paul Gemignani conducting the New York Philharmonic. Filmed live at Avery Fisher Hall, New York City.