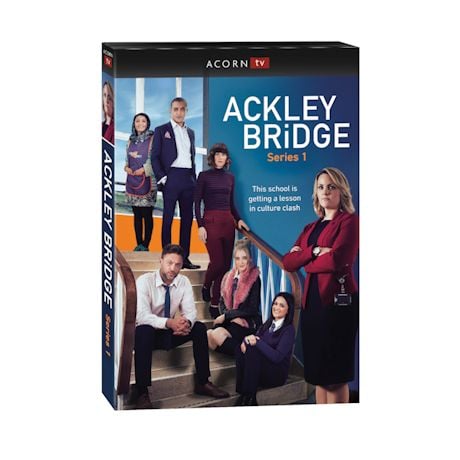 $39.99 $19.99
BUY BOTH SERIES, SAVE 10%
Share Me:
add to wish list
Overview
After years of racial segregation in a small Yorkshire mill town, two high schools combine into Ackley Bridge College, integrate white and Muslim students. But the transition is far from easy for teachers, students, or the community. Tackling issues like racism, homophobia, and religious discrimination, this timely series is a look at a funny insight into modern-day Britain. With Jo Joyner (EastEnders) as headmistress Mandy Carter. 6 episodes, about 4 ¾ hrs, 2 DVDs, SDH. Mature content.

Episode 2
Forced to sneak a baby into school, Jordan blackmails Steve for help. Vivacious student Missy plots a way to get back at her former best friend, Nasreen, but her plan backfires when rumors about the two circulate around school.

Episode 4
Missy awakes to a huge shock but keeps it a secret to protect her younger sister. Lila comes out of the closet to stop her colleague's advances, but her private life soon becomes public knowledge.

Episode 5
While Missy skips school, Nasreen argues with her mother about her father's wish to send Nasreen to Pakistan for an arranged marriage. Before the school's first big rugby game, Steve can't bring himself to forgive Mandy for her affair, and he lashes out at Sadiq.

Episode 6
Mandy plans an Open Day at Ackley Bridge to encourage prospective students and their parents to enroll, but an outburst from Jordan and a surprise speech from Sadiq's daughter, Alya, derail the event.