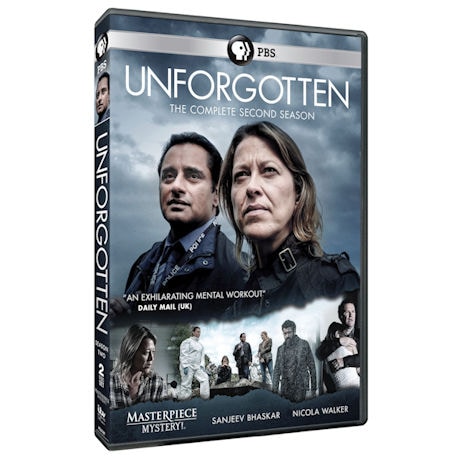 $34.99
3 Reviews Write a Review
Item #: XC1162
DCI Cassie Stuart (Nicola Walker, Last Tango in Halifax) and DI Sunny Khan (Sanjeev Bhaskar, The Indian Doctor) face an impossible cold case. A lawyer. A nurse. A schoolteacher. A police officer. These four suspects are the pieces of the puzzle. But as Cassie and Sunny put this picture together, the more blurred it becomes. The investigation will question their END_OF_DOCUMENT_TOKEN_TO_BE_REPLACED
BUY 2 OR MORE SERIES, SAVE 10%
Add to Wish List

DCI Cassie Stuart (Nicola Walker, Last Tango in Halifax) and DI Sunny Khan (Sanjeev Bhaskar, The Indian Doctor) face an impossible cold case. A lawyer. A nurse. A schoolteacher. A police officer. These four suspects are the pieces of the puzzle. But as Cassie and Sunny put this picture together, the more blurred it becomes. The investigation will question their assumptions about the most damaged and destructive in society. When a victim becomes a criminal, is punishment the same as justice? Seen on Masterpiece Mystery! 6 episodes, 4½ hrs, 2 DVDs or Bu-ray discs, SDH.

Episode 1
Detectives Cassie and Sunny, who find themselves thrown into another historic murder case with the discovery of a body. This time it's the perfectly preserved remains of a middle-aged man found in a suitcase in the silt of a London river. As the detectives begin the complicated task of trying to identify the victim, four unconnected people go about their business — Brighton-based lawyer Colin Osborne, pediatric nurse Marion Kelsey, teacher Sara Mahmoud and respected police officer Tessa Nixon - unaware they are about to be dragged into the investigation.