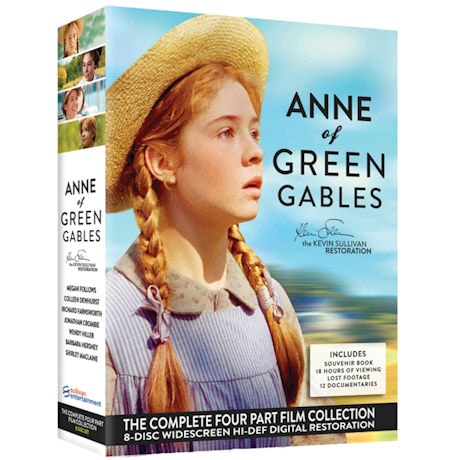 L.M. Montgomery's Island: This informative and entertaining documentary narrated by Cedric Smith tells the story of L.M. Montgomery's life and her love of Prince Edward Island through archival photos, beautiful cinematography and excerpts from her personal journals.

Kevin Sullivan Reinvents Anne: In a candid interview, Kevin Sullivan discusses the events that led up to the production of Anne Of Green Gables: The Sequel and what inspired the script and his casting choices.

Behind The War: Kevin Sullivan himself narrates this in depth look at some of the historical events surrounding World War 1 and how they tie in with Anne: The Continuing Story.

The Missing Story - Marilla Cuthbert's Death: This condensed version of the Road To Avonlea episode "Old Friends, Old Wounds" explains how Marilla Cuthbert died and what led to the poor state of Green Gables at the beginning of Anne: The Continuing Story.

The 100th Anniversary Of Anne - The Making Of An Icon: This insightful documentary explores the World's enduring love for Anne through interviews with Kevin Sullivan and members of the cast and crew of Anne: A New Beginning.

Searching For A Beginning - Kevin Sullivan's Fictional Journey: Kevin Sullivan describes the creative journey he went on to find inspiration to write the story of Anne's life before Green Gables.

The Stars Align - A Director's Dream: The All Star cast of Anne: A New Beginning, including Barbara Hershey and Shirley MacLaine, discuss what drew them to the project and what Anne means to them.

The Next Anne - Transforming The World`S Expectations: Kevin Sullivan and the Casting Director`s John Buchan and Jason Knight explain the exhaustive search they underwent to find a new Anne Shirley.

Blueprint For Light And Design: Director of Photography Yuri Yakubiw and Production Designer Ray Lorenz discuss the challenges they faced creating the visual world of Anne Of Green Gables: A New Beginning.

Frills And Furbelows: Costume Designer Martha Mann explains the process of costume design and how the original Anne of Green Gables influenced the wardrobe for Anne: A New Beginning.

Kevin Sullivan's Classic: This hour long documentary explores the creation of the first three Anne films and the spin off television series Road To Avonlea through interviews with Kevin Sullivan and numerous cast members including Megan Follows, Jonathan Crombie, Colleen Dewhurst, Rosemary Dunsmore and many more.

The Restoration Of Three Classics: This informative documentary explains the process and challenges of restoring the original Anne Trilogy in High Definition.

Behind The Mythology Of Green Gables: In this insightful documentary, Kevin Sullivan talks about why he believes people are drawn to Anne`s story and why Anne Of Green Gables has such an enduring legacy.

Souvenir Booklet: Jam packed full of great cast photos from all four Anne films and loaded with behind the scenes information, cast biographies and chronologies, this souvenir booklet is the perfect companion to the 8 DVD's included in this incredible collection.