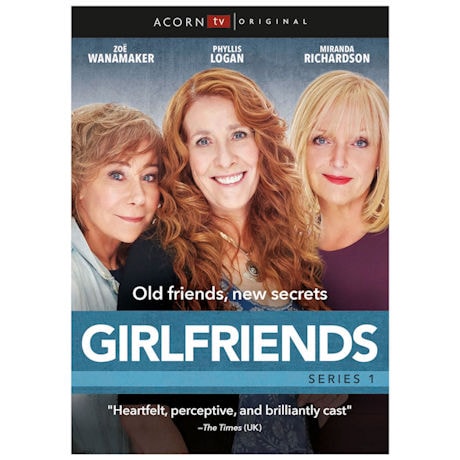 $39.99 $24.99
Share Me:
add to wish list
Overview
Miranda Richardson (Churchill), Phyllis Logan (Downton Abbey) and Zöe Wanamaker (Agatha Christie's Poirot) star as a trio of friends who are facing the responsibilities that come with being a modern woman in the "sandwich generation"—busy caring for both their grandchildren and their own aging parents. Thankfully, they have each other for support. Humorous, heartfelt drama from Love, Lies and Records creator Kay Mellor. 6 episodes, 8 hrs, 2 DVD, SDH.


Episodes
Episode 1
Linda and Micky celebrate their anniversary on a cruise ship, but tragedy strikes when Micky drinks too much. Meanwhile, Sue faces a crisis at work and Gail's son, Tom, returns home from prison.

Episode 2
On Sue's birthday, detectives come to Linda with new information about her husband's disappearance, including evidence that Micky was on the phone with another woman when he went overboard.

Episode 3
The police interrogate Linda about her involvement in Micky's death. After arguing with the mother of Tom's son, Gail deals with her mother's increasingly bad dementia and considers putting her into a home.

Episode 4
The night before the hearing into Micky's death, Gail walks in on a startling scene at Linda's house. Tom tries to bring his son back with his mother's help, and he also receives surprising news from Linda's daughter, Ruby.

Episode 5
Linda takes drastic action when a body turns up in Spain that could be Micky's. While taking care of Linda, Sue runs into John's wife and receives some surprising news about the business.

Episode 6
The girlfriends travel to Spain to identify Micky's body, and Linda makes another shocking confession to Gail and Sue. When an unexpected turn of events threatens to upend their lives, the women band together to devise a plan.