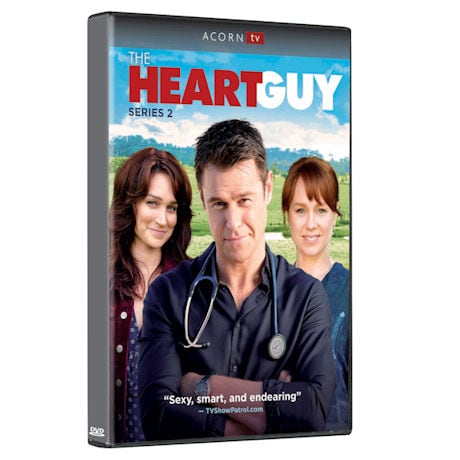 $59.99 $39.99
Share Me:
add to wish list
Overview
Hugh Knight is a talented but arrogant heart surgeon banished from Sydney to his rural hometown of Whyhope to work as a GP. As the sand slowly runs out on Hugh's probation, the Knight family must decide whether their struggles will bring them closer together or tear them apart. 10 episodes, 3 DVDs, SDH. Mature content. (Known to Australian audiences as Doctor, Doctor.)


Episodes
Episode 1
Hugh is in Sydney with Penny to watch the transplant operation using the artificial heart he designed, after which he returns to Whyhope. As Meryl prepares for her mayoral inauguration, Charlie tries to win Matt back.

Episode 2
Hugh and Betty scheme a way to get rid of Nora, Penny's rude and incompetent replacement, without going to the medical board. Hayley feels guilty about taking her relationship with Ajax to the next level.

Episode 3
With Nora out of the picture, Penny takes back her old job but must deal with the multiple messes Nora left. Hayley's parents visit the Knights after her engagement to Ajax, and Charlie finds a book she wrote in college.

Episode 4
After attending to the victims of a fatal plane crash, Penny is surprised by an unexpected visit from Toke, the boyfriend she left in Sydney. Ajax takes a job at the hospital, and Meryl's mayorship is under review when the missing ballot boxes are found.

Episode 5
Now under investigation for election tampering, Meryl hires Penny's sharp-tongued sister, Celia, as her lawyer. Hugh comes to the aid of woman who doesn't speak English, and he is forced to perform a risky surgery.

Episode 6
As Penny's relationship with Toke intensifies, Hugh becomes increasingly jealous and gives Penny an ultimatum. After facing trouble at work, Charlie makes an enemy of her former boss and considers a career as a full-time writer.

Episode 7
Hugh asks Penny out to dinner, but she ends things when he tests positive for drugs. Hayley participates in the Miss Whyhope competition, which consists of running, shooting, and scone baking; but another contestant catches Ajax's eye.

Episode 8
After collapsing in his car, Jim is rushed to the hospital, where Hugh discovers that he's been skipping his dialysis appointments. Hayley is still frosty to Ajax, and Charlie can't stop reading bad reviews of her book.

Episode 9
As Hugh prepares for the operation to donate his kidney to his father, Jim finds it difficult receiving extra attention from the family. Hugh's estranged wife, Harriet, unexpectedly arrives from America, and Ajax tries to win Hayley back.

Episode 10
While Hugh recuperates from surgery, Penny laments his reunion with Harriet. Hayley assigns wedding preparation tasks to the family, but Hugh still doesn't approve of the marriage and causes a rift with Ajax.